At least when it comes to roguelike dungeon crawlers, there are a couple types of gamers: those who pop expectantly out of their holes like prairie dogs on a warm summer day, sniffing out the newest game, and those who go in search of the nearest chalk board and a sharp pair of fingernails, preferring that torture to the endless death-and-restart loop of a roguelike. Since it has been approximately fifteen seconds since we’ve had a new retro-pixel art-dungeon crawling-roguelike, fans of the genre will want to look at Dungeon and Gravestone from Japanese web and indie game developer Wonderland Kazakiri.

Now on Xbox One, Xbox One X|S, Switch, PS4, PS5 and PC, Dungeon and Gravestone appeared first on iOS as Dungeon of Gravestone in 2016. It has taken five years to nail down the new conjunction (I think I would have settled on Dungeon to Gravestone, but I’m not a developer) though the game is essentially the same product as it was on mobile. You play as a newly resurrected dead guy, pick a corporeal form and dive into the ominous-looking subterranean dungeon to the north of town in search of treasure and monsters to kill. You die and start again, rinse and repeat, either enjoying the Groundhog Day familiarity or wishing for sweet release from your endless karmic predicament.

No, YOU Threw the Controller

Those consulting their well-worn copies of the Field Guide to Roguelikes will note some distinguishing characteristics with Dungeon and Gravestone: death means a restart in town (itself randomly generated), all treasure picked up on a run is lost on death, and levelling up is split between character levels, which start over with each descent into the dungeon, and various stat and inventory upgrades, tied to experience and which are permanent. Deeper in the dungeon, the treasure and challenges become greater, with environmental hazards, traps and finally boss monsters added to the mix. Every once in a while players can teleport to a hidden, puzzle-heavy bonus level and the chance for a special reward and every five levels or so, players can opt to return to town, preserving their loot. Of course, that is a risk-reward proposition as it means restarting from the top of the dungeon next time.

Roguelikes comes in many flavors and forms, and can range from brutally unforgiving to downright genteel. For a few reasons, Dungeon and Gravestone leans towards the former. There is literally no tutorial or instruction and the player will need to discover the game’s mechanics more or less by trial and error. To be fair, fans of the genre will recognize familiar mechanics and tropes from other games and the basics are pretty straightforward, but more subtle things, like the game’s upgrade system or even stat icons are never explained. No one’s suggesting a lengthy tutorial that goes on for hours before the opening title card finally appears, but some elements of Dungeon and Gravestone are unwelcoming and some unwitting or uninformed early choices can have a long term impact on success. 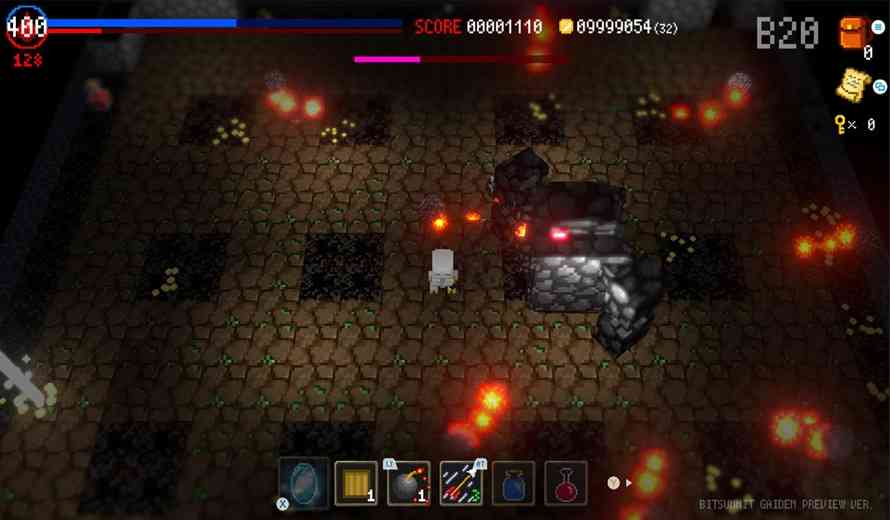 Dungeon and Gravestone is not a retro pixel-art game, but instead has an isometric, Minecraft-looking voxel art style with a bit of tilt-shift effect in the hub town. The blocky nature of the environments, monsters and characters certainly takes some of doom and gloom out of what could be grim setting, but there is so little detail in the blocky monsters that it is often hard to read their facing and block their attacks, and occasionally the angle of the isometric view blocks important items or environmental elements. While there is an optional overhead camera angle it is of limited utility. While we’re talking about the game’s aesthetics, mention has to be made of Dungeon and Gravestone’s chiptune-like musical score, pleasantly forgettable in the town but incredibly repetitive in the dungeons themselves. Turning off the music is a sanity-saving necessity, but that exposes what’s left: a pretty minimal range of environmental sounds.

Not unlike a turn-based RPG, movement in Dungeon and Gravestone is on a grid/square system. Although combat is real time, movement for both monsters and the player character is along straight paths and even after many hours of play, the imprecise nature of movement and especially, the difficulty in positioning the player character for combat remained the game’s biggest annoyance, resulting in countless deaths, missed treasure and unintended, one-way-only progression to a deeper level of the dungeon.

Turn That Music Down Maybe?

Dungeon and Gravestone would suggest that the solution to frustrations with movement and facing is slowing down but then it counters its own argument with a constantly diminishing blood meter (think of the bleed mechanic in Dark Souls). Pools of blood or limited consumables refresh the blood supply at various points but staying still or moving too deliberately is just as dangerous and as frustrating as trying to rush through the levels. Like those of so many of its brethren in the genre, the levels in Dungeon and Gravestone are procedurally generated and this results in some pretty hit-or-miss environments with early levels being nearly empty or the potential for respawning into a new level directly next to a monster.

With its close-cousin-to-Legos look, smallish levels, and fast load times on current consoles, Dungeon and Gravestone has some addictive curb appeal but ultimately fails to deliver anything really new to a very crowded genre. There is depth to be sure, both in the options for character progression, stuff to find and fight, and the dozens of levels of the dungeons and hidden areas. The buzzkill for me was not the expected and familiar roguelike loop, but the frustrating movement mechanics, the necessity of replaying the uninspired, bare-bones early levels over and over, and the slow progress towards building a reasonably powerful character. Dungeon and Gravestone will scratch an itch for the devotees of the genre but I suspect those without a lot of patience will bounce off pretty quickly.

*** Xbox One game code provided by the publisher *** 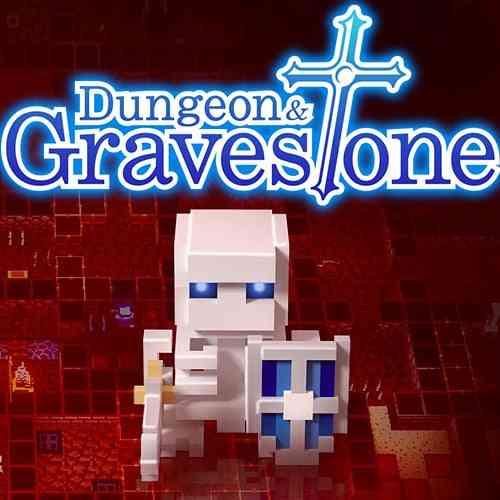