4 Reasons to Get Pumped for Warframe: Plains of Eidolon

2. The Ostron, Your New Friends

New to the series is the Ostron, a race of scavengers who live in a settlement called Cetus. Cetus is home to a large marketplace and is the central hub for up to 50 players to find missions, sell goods, and experience the all new weapon crafting system. Players will be able to customize their weapons by selecting the blade, hilt, and pommel options, as well as naming the weapon. These parts will alter the weapons stats, your stance, and abilities associated with it. Ostron are a peaceful people – if a little strange – and will open up a whole host of new crafting items, weapons, and gear based on their ability to scavenge. It’s interesting to see a more human-like species in the game and almost seems like they are the strange ones, not the space ninja you play as. 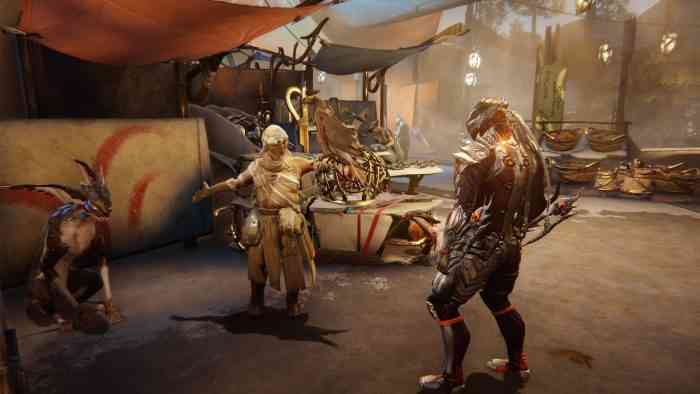 The plains feature a day and night cycle which is common in open world games. Players can expect to encounter tougher enemies at night with better loot, but the real question is: why is it called the Plains of Eidolon? When night falls over the planet, an enormous kaiju-like monster rises from the depths and stalks the planet surface. This is Eidolon. Eidolon is set to be the most brutal of boss battles and should only be approached by a full squad of high level, highly skilled, and confident Tenno. We got a brief glimpse of Eidolon in the gameplay trailer earlier this year and it’s refreshing to encounter such a gargantuan enemy in a game – and a free game at that.

Those are 4 reasons to be pumped for Warframe: Plains of Eidolon. Is there anything else you are looking forward to in the upcoming add-on? Let us know on Facebook, Twitter, or the Comments section below.

Discovering What it Means to be Altered: Outriders Boss Battle Gameplay
Next Mega Man’s Weak Links – The Games that Nearly Sunk the Franchise
Previous Spotlight on the Impressive Indies of PAX West 2017, Part 1 – From Fights to Feels