The recent release of Mega Man Legacy Collection 2 brings the tumultuous years of The Blue Bomber back into the spotlight. The Super Nintendo’s Mega Man 7 and PS One’s Mega Man 8 came with heavy criticisms back in the day, making them some of the most reviled entries in the series. Now that we can revisit these two “classic” games easily in Legacy Collection 2 I went back and played these two troubled titles, hoping to answer the question: are these games really as bad as the world remembers?

I’m going to start out of order because the answer for Mega Man 8 is far more clear cut: sweet merciful crap, it is not good. This game will elicit every negative emotion possible, starting with the cringy voice acting right in the opening cutscene. Seriously, listen to Bass in this clip:

I can feel the indifference in the actor’s voice as if he knows before he says anything that this game is doomed. The other cutscenes don’t get much better, with Roll’s shrill voice sounding like nails on a chalkboard and Dr. Light stumbling over his lines (like where he tries to put a W on the words “Mega Man” here). If this was meant to be a new and exciting way to tell a Mega Man story, it simply did not work.

“If this was meant to be a new and exciting way to tell a Mega Man story, it simply did not work.”

That’s not even getting into the game itself, which is a master course in pure frustration. Unresponsive controls make even the smallest pits death traps, enemies always seem to be in the perfect spot to wreck me, and boss fights range from challenging to downright absurd. None of these things compare, however, to what may be the single most frustrating task in Mega Man history: the snowboard section of Frost Man’s stage.

It’s bad enough that each obstacle is met with a robotic, annoying voice shouting “JUMP JUMP” or “SLIDE SLIDE” at me as I try to get through, but making it through this gauntlet of pinpoint precision timing will comes with hair being pulled, controllers potentially being thrown, and more than a few angry resets. There are moments like this throughout MM8, but the stupid snowboard slalom takes the cake.

Now before I move on I don’t want to completely rag on Mega Man 8, so I will say the music is great, very catchy and fun. There, there’s a compliment.

Mega Man 7 is a far more interesting case. This game feels more like the previous games, mixing creative level design with manageable obstacles. The action is slowed down compared to the 8-bit games, but the rest of the game adapts to that change in speed. There aren’t any massive difficulty spikes a la MM8, just a building challenge throughout the experience. Most importantly, there are more secret paths buried in each level than any core Mega Man game before it, so replaying each level is mandatory to fully 100% the game. Thankfully I can buy an item that allows me to exit a level where the Robot Master has already been conquered, so re-entering a stage is not entirely painful. There’s even a neat Easter egg referencing another Capcom franchise in one particular stage, but I’m not going to spoil that here.

The one change MM7 made that I don’t like is introducing the Robot Masters four at a time instead of giving me all eight choices from the jump. Half of the fun is figuring out the fastest path to Wily, why take that away from me by cutting it in half? Sure there’s a story-progressing middle stage between the two groups, but why couldn’t that trigger after four bosses downed? Especially since the weapon that each boss is weak against affects them in unique ways, while other weapons may make them more formidable. 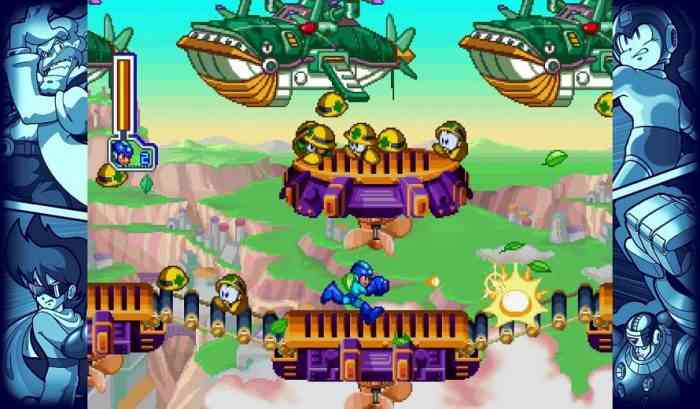 For example, a successful Danger Wrap blast against Cloud Man encapsulates him in the bubble with the bomb, forcing him to float to the ceiling before taking big damage. It also resets his attack pattern, giving me a huge advantage in battle. Conversely, shooting Spring Man with the Thunder Bolt turns him into a magnetized lightning rod, pulling Mega Man toward him and zapping him. This injects a big risk/reward dichotomy into just blindly experimenting with weapons, making each boss fight even more interesting.

Despite the slower place Mega Man 7 seems to serve the franchise well, so what happened? Why does MM7 sometimes get a bad rap? I blame the Mega Man X spinoff franchise, a far superior set of games that already had two entries before MM7 hit the Super NES. A lot of what makes MM7 so good, particularly the boss battle enhancements and the multiple secret paths, started in Mega Man X, so seeing them added to the core franchise seems like more of a cut and paste job.

“With Legacy Collection 2 bringing it back to the forefront, I hope Mega Man 7 might get the respect it deserves.”

Mega Man X was a step forward for Mega Man when it launched in January 1994, while Mega Man 7 was playing catch-up more than 18 months later in September 1995. Note that this isn’t Mega Man 7’s fault, when taken out of MMX’s shadow and placed alongside its “Mega Man Classic” counterparts it holds up quite well. However, at the time its derivative nature definitely cooled any momentum going for it.

With Legacy Collection 2 bringing it back to the forefront, I hope Mega Man 7 might get the respect it deserves. It’s a fun game worthy of the name it carries, even if it makes a few unnecessary tweaks. Mega Man 8 is less deserving of my time, as that game has aged about as well as a loaf of bread after a month in the pantry. I applaud Capcom for completing the Mega Man decalogy with Legacy Collection 2, even if half of the offerings are considered weak links, and I hope that this leads to more Mega Man in the future.


Mega Man: The Wily Wars is Coming Back in This Ultimate Retro Collector’s Edition