Fortnite is having yet another crossover. This time, the game is collaborating with The Tonight Show Starring Jimmy Fallon. The famous TV host himself recently made the announcement about the crossover on his show.

Fortnite is having a new level that is based on the Rockefeller Studio. The level will be called Tonight at the Rock. Basically, it will be a faithful recreation of the studio as seen on TV shows such as 30 Rock and The Tonight Show. Plus, players can also enjoy some mini games as they explore the area. 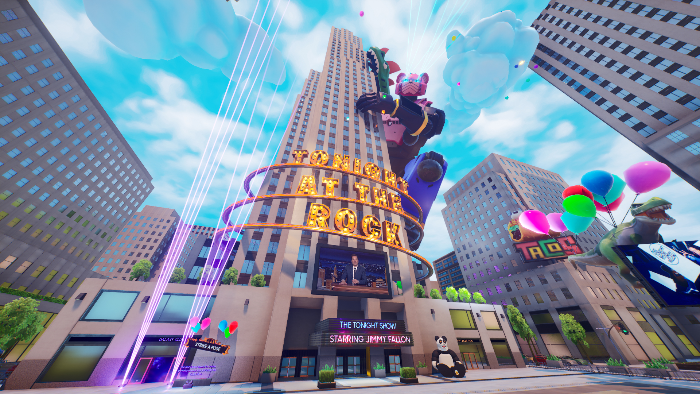 According to Fallon, his crossover with Fortnite is sponsored by Samsung. However, the Tonight at the Rock level is neither sponsored nor endorsed by Epic Games. As mentioned earlier, players can explore the building including its surrounding areas. Devs showed a brief preview of the level. Based on the clip, it looks like players will also have the opportunity to drive cars in the nearby streets.

Fortnite’s Tonight at the Rock level will also have its own currency. Players can make use of these Fallon Coins to gain powerups. Examples of the mini games that fans can enjoy are racing and putting Ballers into holes. The island code that players will need for Tonight at the Rock is 2678-5325-0723. Unfortunately, however, there will be no Fallon skin for the TV host within Fortnite—or at least, not yet.

Fortnite is a popular battle royale and tower defense game. It boasts of a cartoony aesthetic and its gimmicky building tools. Players can build structures around themselves as a form of protection from the enemies. The game has become so popular that it has already had a long list of high profile crossovers since launch. Examples would be DC Comics, Marvel, Dragon Ball, and Star Wars, to name a few.