Multiple Hunt: Showdown players had themselves killed by an unseen enemy. Despite having no one else in the area, the death screen said the culprit was just a few meters away. Apparently, these players died at the hands of Cain.

Cain is Hunt: Showdown’s dirt man. This $7 premium hunter skin has become very popular among players as of late. His entire look makes him blend so well with the game’s dark environment. His outfit is primarily just bare skin covered in dirt and dark-colored paint. 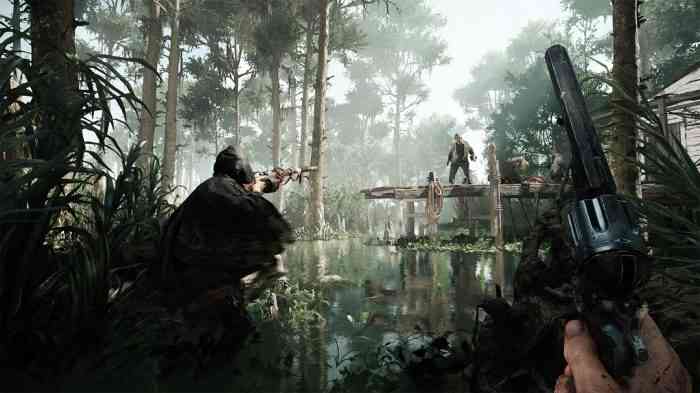 Fortunately for Hunt: Showdown fans, Crytek listened to their complaints. They just made a second round of artistic changes to Cain’s character model. Devs are hopeful that the changes they implemented will do the trick and please the game’s growing community.

Devs recently shared two comparison images for Cain. One was a cleaner model view, while the other showed what the character really looks like in-game. At first glance, it remains unclear if the changes are going to make a huge difference for players.

Cain’s new skin color certainly makes him look more peachy. Plus, the white paint on his body is brighter. These are all easily visible on the clean model view. However, they are not as clear in the environment comparison.

According to Hunt: Showdown devs, they do not want him to blend too well into the game’s backdrop. However, they want to make sure that his wild man aesthetic is maintained. Considering that Cain is covered in dirt within a game that features similarly covered dirt, it is not hard for him to be a chameleon. Plus, the time of day during matches is purposely random. This gives him an added bonus of darkness to make him even more stealthier.

Have you encountered Cain? Let us know in the comments below.