Fortnite’s collaboration with the Uncharted franchise will feature both the video game and the movie versions of the characters. The new cosmetics will include alternate styles for Chloe Frazer and Nathan Drake that capture both their movie and game likenesses.

The Uncharted collaboration will be out on February 17th. There will also be a new in-game item, Drake’s Map, that will arrive the next morning. This map will serve as a Chapter 1 treasure map that some die-hard players may recognize. It will take Fortnite players on a hunt for buried treasure that will offer excellent loot for anyone who discovers it. 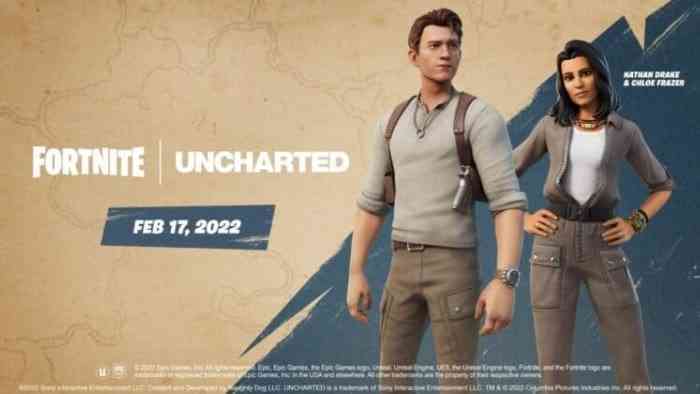 These Fortnite skins will be shown in different styles, and not as entirely different skins. This suggests that players who purchase either version of either hero will immediately get access to both of them. Fans are also expecting that there will be a bundle that will feature both heroes including all Uncharted cosmetics.

Epic Games first started teasing about the collaboration with a treasure hunt website. This tease came days after leakers found a code within Fortnite that pointed towards an Uncharted treasure map.

“Epic Games just sent me this to solve for a new collaboration!” a fan wrote on social media. “I need to combine my information with other content creators.”

Fans had to solve a 14-character password which they were able to solve in just a matter of minutes. Once they solved the puzzle, they were directed to a Fortnite Uncharted crossover trailer.

So far, this trailer has only confirmed the characters’ wearable outfits. However, taking a look at Fortnite’s tradition, there will most likely be additional cosmetics as part of this collaboration. According to Epic Games, any Uncharted-related items will appear in the game’s item shop on February 17th. Nathan Drake’s blockbuster will be on the big screens on February 18th.

Are you excited for this collaboration? Let us know in the comments below.

Vampire Survival Game V Rising Is the No. 12 Game on Steam Right Now
Next
Call of Duty 2022 Is Going to Be a Sequel to Modern Warfare
Previous
A New Midnight Club Game Could Be in the Works