Lost Recipes Cooking Up on Quest Later This Month

Have you ever thought about the recipes from a time long before our own? Have you ever wanted to cook them? Now, you can. Schell Games historical cooking simulator, Lost Recipes, is coming to the Quest VR platform later this month. A press release about its arrival to the Quest provides more details. 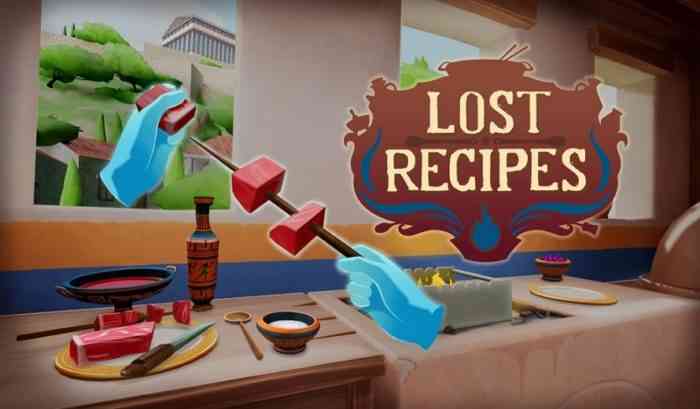 In the game players cook for ghosts. That’s right. Ghosts. As the player character you will cook ancient, traditional, recipes from different cultures throughout time. Additionally, you will be cooking this food in historically accurate kitchens, with historically accurate ingredients. From ancient Greece, to China, and Maya, you will cook accurate recipes that have passed through generations of people all to be presented to players in virtual reality. Also, players will learn about how geography and history morphs cuisines around the world.

A trailer released last month shows off the gameplay of Lost Recipes and how it looks from the players point of view.

“Cooking has the power to bring people together and we wanted to capture this experience for players in and outside of the Quest headset.” Says Melanie Harke, Lost Recipes Project Director in the release.

Though the team behind Lost Recipes try to remain as accurate as possible with their recipes in the game, they admit that some things are out of their control in real life. Thus, some of the recipes they attempted to make outside of the VR realm need some alternate ingredients that still exist.

Currently, Lost Recipes is releasing on January 27th, 2022. It is priced at $14.99. Players can wish list the game on the Quest coming soon page.

From Cannes To Your Home – The Secret Of Retropolis Launches
Next
Dragon Ball: The Breakers Will Be Connected to the Xenoverse Titles
Previous
Destiny 2 Devs Will Reward Vets Who Tank on Purpose to Save Newbies