This is Pistol Whip’s Biggest Update Yet

Cloudhead Games’ critically acclaimed VR rhythm shooter Pistol Whip is getting a new Western-themed cinematic campaign known as Smoke and Thunder, and it’s releasing sooner rather than later. Next week, Pistol Whip’s most noteworthy update as of writing will arrive on Oculus Quest, PCVR, and PlayStation VR.

Smoke and Thunder will be adding a ton of new content to the game, including a new fully-voiced campaign set in the Wild West, a brand new star-studded soundtrack to shoot to, and a game-changing “Styles” system sandbox that will enhance replayability. All of these additions will be free updates for gamers who already own Pistol Whip.

Pistol Whip’s first cinematic campaign took players to the future in 2089–now, Smoke and Thunder will take them back in time to the old west. This badass blast from the past brings with it new weapons, new mechanics, a dastardly new threat, and a brand new boss fight that’s sure to capture players’ imaginations.

This five-scene cinematic campaign will feature tracks from The Heavy, Black Pistol Fire, Bones UK, Devora, and an original never-before-heard track from Magic Sword, which sounds pretty excellent to us. The fully-voiced story will focus on sisters Jessie and Tess, the latter of which was mentioned in the brief 30-second-long teaser trailer. Judging by the voiceover from that same trailer, it appears that Jessie will be taking on the protagonist role in this campaign.

Once players have finished the main campaign, they can unlock new options in Arcade mode that will allow them to use whatever weapon and modifier they want in any combination. Even better, the new Styles system sandbox lets you combine your favorite weapon type with up to five different modifiers, which means you can fine-tune your experience until it’s exactly what you want.

Also available in the new campaign are four new modifiers, new weapon types, and a new melee mode in the Brawler Style. Styles can be used with all past Pistol Whip updates, so there’s no need to pick and choose when you play. 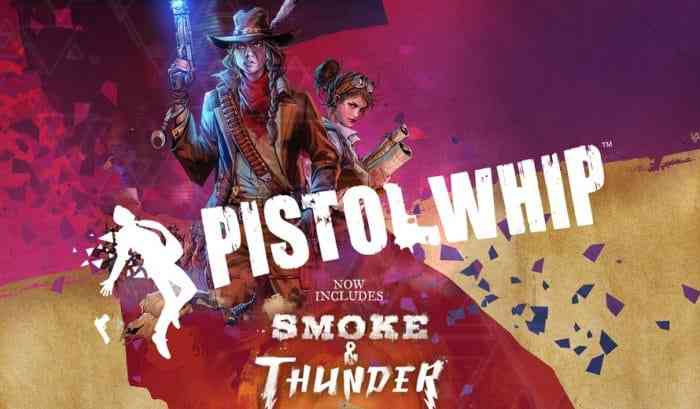 Pistol Whip: Smoke and Thunder will be available for Oculus Quest, PCVR, and PlayStation VR on August 12th, 2021.

Will you be pouncing on this VR adventure? Let us know down in the comments, or hit us up on Twitter or Facebook.

Warhammer Age of Sigmar: Tempestfall VR Review – Tempestfall Stuck In A Teapot?
Next
Diablo Immortal Release Delayed Until First Half of 2022
Previous
We Are Giving Away an EPOS B20 Microphone To One Lucky Winner