Everyone has performed an air guitar solo in their living room at least once. If you somehow haven’t, you’re missing out! It looks incredibly silly but it is, in fact, totally rad. Unplugged is a high tech extension of this low tech fantasy. Suddenly people are cheering for you, the stakes are higher, and it sounds awesome. Assuming you and the hand tracking get along, you’ll have an excellent time.

That’s right! You control Unplugged like you would any proper air guitar- no controllers required. For me, this produced some mixed results. By which I mean every motion but the stupid finger pinch button click worked great. If you’ve ever used hand tracking on a VR rig, you’ve used this one countless times. If you haven’t, it sucks more or less every single time. Everything else is perfect! Moving your hand from chord to chord is pretty much spot-on. The strums hit just like they’re supposed to, as well. It’s truly just the act of grabbing and pinching that the whole game whiffs at.

No Controller Required, Of Course

Although really, the fault for this one lies with the Quest itself. Perhaps if you’re running this game on the Quest 2, such problems won’t mean anything to you. But this is a problem I’ve experienced all across the Quest and its many apps. Thankfully you never have to do it during songs. But still, adjusting your guitar beforehand? It’s like trying to put down a plastic straw wrapper. Does that make sense? I’m saying you can neither pick up nor put down this instrument without a mighty struggle. 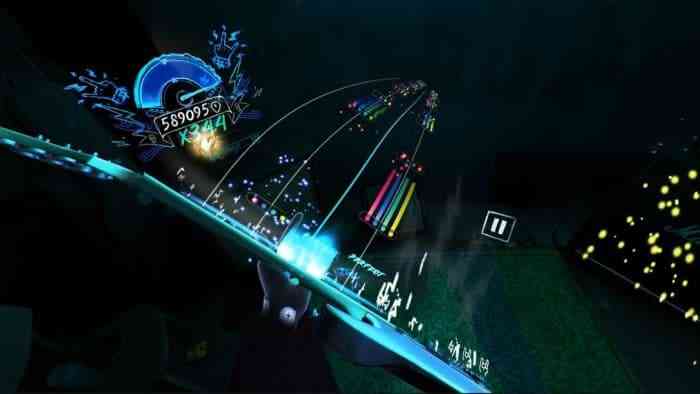 But what about the music? It’s amazing, assuming you were a teenager in the 90s. Which I very much was! The tracklist isn’t actually confined to a single generation or subgenre, though it does feel specifically tailored to the smoky basement suites of my distant youth. I could listen to every track repeatedly, which is good news, given my skill level. Here’s the tricky part, where I confess to a love of rhythm games that vastly outpaces my skills. To that end, I can’t score Unplugged on any rhythm game toughness scale. What I can do, is tell you that certain finger placements caused me real, actual pain. There’s things I’d never done with my fingers in my life, before I played this game. The tracklist is excellent, though.

Your teacher and coach throughout this air guitar journey is Satchel, the lead guitarist of Steel Panther. His teaching style is mostly focused on rock star attitude, along with a basic primer on the mechanics. By the end of the tutorial track, you’re more or less prepared for the business of rocking out. It’s weird, having this real human in a glam rock wig light your way through an ephemeral world of cheers and glittering visual effects. Beyond Satchel’s occasional presence, the graphics in Unplugged are downright utilitarian.

Just You And The Stage

To be fair, they aren’t bad graphics. You’re plopped into a little backstage setup with all the usual accessories, every poster and piece of gear adding more authenticity. The guitars, the menu catalogs, and the song effects are all crisp and polished. It just feels a bit spare. Like, all the processing power and memory is being funneled into the act of playing air guitar. Everything else is drained or blurred into obscurity in service to this vision. I understand the decision to do so, especially while actually playing. You get such intense tunnel vision that extra assets would be kind of a waste. The visuals just feel a little empty, at least in the brief moments between songs.

Unplugged is the long-awaited answer to the question “how cool is air guitar, really?” It turns out air guitar is actually Guitar Hero without the massive custom controller taking up space in your living room. Which is pretty cool! If you’ve got a head for rhythm games, along with a lingering fondness for timeless rock songs, there’s a lot to latch on to here. The hand tracking is better than you’d expect, although there are a couple of choke points to contend with. Furthermore, those quality motion controls can’t stop certain finger positions from being real bone-breakers. Small hitches aside, Unplugged is an unconventional, engaging interpretation of VR rhythm games. 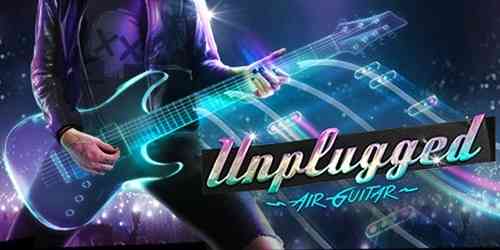