That Is America’s Ass

When there is a film adaptation of comic books, particularly superheroes, there is often some level of deviation from the source material when it comes to costume design. People say they want a comic book accurate suit, but no one really wants to see Wolverine with the dopey mask and the blue shoulder pads and matching banana hammock.

What I mean to say is that some costumes just look bad on screen. Take Captain America’s suit from Marvel Studios’ The Avengers. Arguably the worst suit in the MCU, but it is pretty damn close to what we see in the comics. Next week, that suit will be available in Marvel’s Avengers. 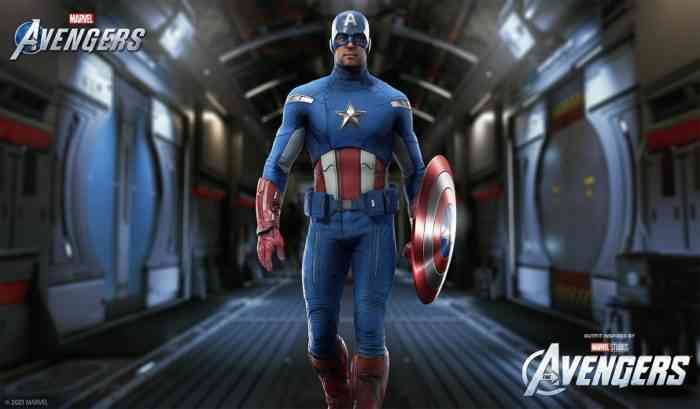 Hopefully, this suit will look better in the video game than it did in the films. All of Cap’s other suits are designed with some sort of function or purpose behind it, but this one kind of looks like he’s wearing something from Party City.

Whether you like this suit or not, there is an interesting prospect on the horizon. As you may well know, there are several MCU-inspired outfits in Marvel’s Avengers already. There are a bunch from Endgame, Black Widow’s suit from her solo movie, and Thor’s suit from Infinity War.

The Avengers and related superheroes have new suits in pretty much every film, so there are a ton of costumes to draw from. Now that Crystal Dynamics is choosing specific outfits from specific movies, we might be seeing more of them, like Black Panther’s suit from Civil War or Hawkeye’s suit from Age of Ultron. The possibilities are vast.

Captain America’s The Avengers suit will be out in the marketplace on August 17th, the same day that the Black Panther DLC comes out. Marvel’s Avengers is out on PC, PS4, PS5, Xbox One, Xbox Series X|S, and Stadia.

Which MCU suit is your favorite? Let us know in the comments below.