Eleven years after debuting in Iron Man 2, after seven on-screen appearances, and after a year of delays, the Black Widow movie is finally coming out. The film takes place between Captain America: Civil War and Avengers: Infinity War, where she teams up with other Black Widows from the Red Room and Red Guardian to take on Taskmaster.

In this movie, Natasha Romanoff will be donning one of Black Widow’s iconic suits, which has been released as a cosmetic in Marvel’s Avengers. The suit is entirely white, which may seem a bit unorthodox, but it is pretty cool. 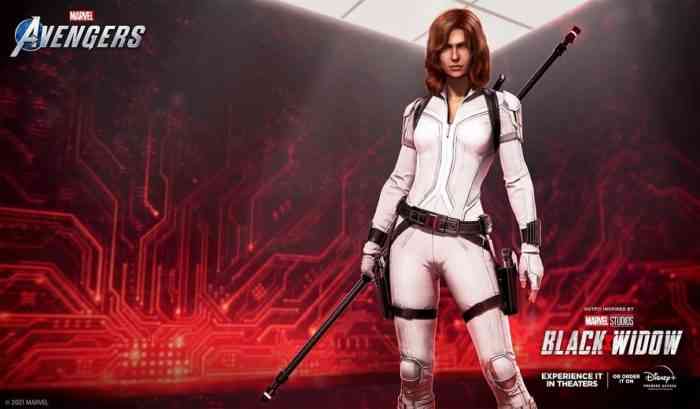 Originally, the white suit was worn by Black Widow to help her blend in with snowy surroundings, just ignore the bright red hair. Obviously, since stealth is not really a mechanic for the game, it’s just there to look good. The “Marvel’s Studios’ Black Widow Outfit” is a Legendary Outfit, so it will cost players a hefty 1,400 credits.

This suit is being released alongside the Volcanic Outfit set and several other cosmetics. It is the second MCU outfit for Black Widow. There are costumes from Avengers: Endgame available for Black Widow, Hawkeye, Captain America, Iron Man, Hulk, and Ms. Marvel available as well.

The Black Widow film will be debuting tomorrow in theatres and on Disney+. Marvel’s Avengers is available for PC, Stadia, PS4, PS5, Xbox One, and Xbox Series X|S.

Will you be getting Black Widow’s new MCU outfit? Let us know in the comments below.


Guardians of the Galaxy Has Received a New Trailer

You Are in for a Treat With Guardians of the Galaxy’s Epic Soundtrack
Next
Vampire: The Masquerade – Swansong Reveals an Unsettling Character Trailer
Previous
Hot Wheels Unleashed Track Builder Showcased in Latest Trailer