Accomplish the Mission First, Then Pet Every Doggo

We all live in a society, but several of Granblue Fantasy’s most popular characters live in a Society–as in, the Society, a secret organization dedicated to hunting down the powerful and often destructive Primal Beasts. Eustace is one of their top operatives, or at least he was before he joined Gran and/or Djeeta’s crews to keep an eye on them. One thing led to another and now the Society’s silent and terrifying erune gunman won’t hesitate to turn on his former employers for the Singularity’s sake. That doesn’t mean he’s going to take it easy on you in the field, though, as shown by his entrance into Granblue Fantasy: Versus. Eustace is the first playable character to bring guns into the fray, making him an expert at engaging opponents from mid- and long-range. He also has knives for close combat.

Eustace hails from the same faction as Zeta and Vaseraga from the original Versus roster and wields a similar seal weapon: the lightning gun, Flamek. His partner Beatrix has yet to make her grand entrance into Versus (she did appear in Zeta’s arcade ending, though), which may be for the best–Bea is mainly known for her hilariously bad luck, which might be a tad bit difficult to simulate in a fighting game. Eustace, meanwhile, is mainly known for his deep adoration of dogs, which instantly makes him the most relatable and likable character in the entire Granblue franchise.

Eustace is the fifth of six characters in the Character Pass 2 DLC bundle, which can be purchased for $34.99 on the PS4™ system and Steam. You can also buy him individually for $6.99. The new battle stage, Dydroit Belt, is also available individually for $3.99. 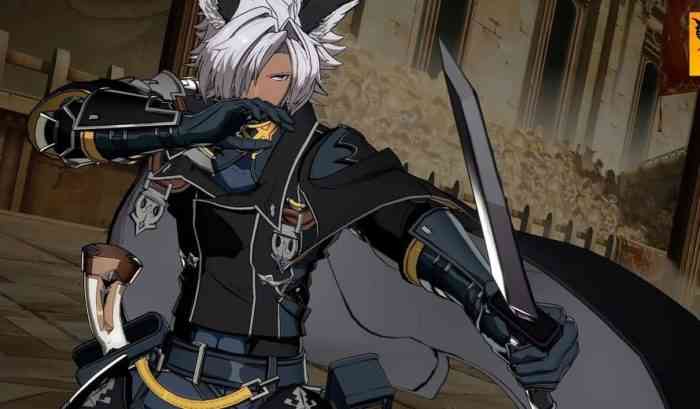 Which mobile game characters are you hoping to see added to Granblue Fantasy: Versus next? Let us know down in the comments, or hit us up on Twitter or Facebook.