Dude Shows Up Dressed Like a Cat and You Don’t Want to Know More?

Today is the inaugural Square Enix Presents show. A bunch of Square Enix games are in the spotlight today like the Tomb Raider: Definitive Survivor Trilogy, Outriders, Life Is Strange: True Colors, and Marvel’s Avengers. In terms of things to look forward to, Avengers players have kind of had to go by leaks and small announcements. Today is when the Hawkeye content, Future Imperfect launches. We are also finally getting a good look on long-term plans Crystal Dynamics has for the game with the Avengers roadmap. 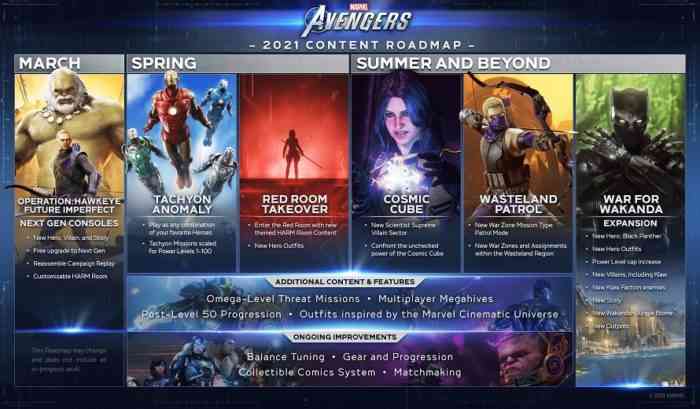 The big ticket item on this roadmap is the official announcement of Black Panther. He was meant to be revealed some months ago, but was rescheduled. In the reveal trailer, we hear one of his villains, Ulysses Klaw and his plans to team up with AIM to launch an invasion into Wakanda. This expansion called War for Wakanda will include the new hero; Black Panther, a new Wakandan Jungle Biome, a new Outpost, new enemies, and a Power Level cap increase. There is no concrete release date, but it is expected for later this year.

Smaller content releases are also planned between now and War for Wakanda. This Spring, Tachyon Anomaly will launch suggesting that players will be able to team up as any combination of characters, including doubles of the same character. Red Room Takeover will see themed HARM Room content. Later in the year, the Cosmic Cube, or the Tesseract as MCU fans know it, will be used in part of AIM’s plans. Speaking of the MCU, Crystal Dynamics will be adding “Outfits inspired by the Marvel Cinematic Universe” at some point. Marvel’s Avengers is available on PC, Stadia, PS4, PS5, Xbox One, and Xbox Series X.

What content are you most excited for? Let us know in the comments below.