We have been waiting on new playable characters in Marvel’s Avengers for a couple of months now. The prospect of so many unique superheroes is what makes the potential of the game so great. Even its most avid players are getting burnt out on the base six heroes. Hopefully, that will all change soon. The Kate Bishop DLC and the next gen version of the game have been delayed, but other future additions have supposedly been leaked. If these leaks are true, we may be looking at the designs of Black Panther and War Machine. 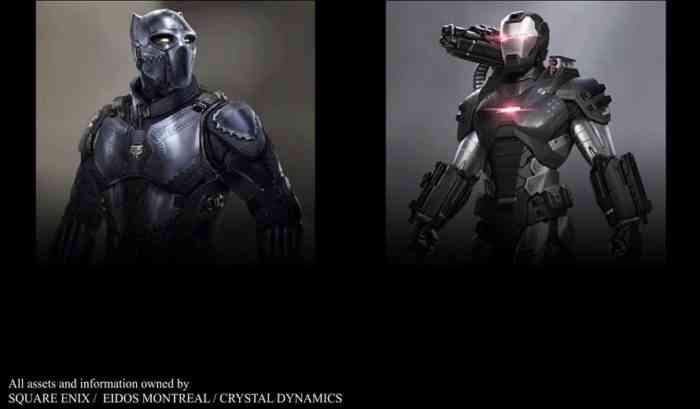 On Twitter, someone made a long thread describing an alleged video or content trailer. It describes new missions and events, which are just rumors up to this point, but there are also some images. These images include hero symbols for Hawkeye, War Machine, and Black Panther, as well as concept art for what appears to be Wakanda, and Black Panther and War Machine. War Machine looks pretty familiar, but Black Panther’s new design is as jarring as Captain America’s was when he was first revealed for the game.

The concept art does not show a full body image, but Black Panther’s design is clearly a departure from what we are used to from the MCU. Instead of a sleek, skin-tight virbranium suit, it appears to be closer to plated armor strapped onto Kevlar. Black Panther apparently was supposed to be the first DLC character revealed, but was switched at the last minute. Early datamining ventures of Marvel’s Avengers also named War Machine and Black Panther as upcoming characters, which lends legitimacy to this leak. Marvel’s Avengers is available now on PC, Stadia, Xbox One, and PS4, and will be available on PS5 and Xbox Series X in the new year.

What do you think of these supposed leaks? Let us know in the comments below.