Maneater Brings Shark RPG Action to Nintendo Switch This May

Eat Your Way Up the Ecosystem on a New Platform

Need more shaRkPG action in your life? Don’t worry, Tripwire Interactive and Deep Silver have your back. Maneater, the celebrated game where you play as a very angry bull shark is coming to Nintendo Switch this May, which means everyone who hasn’t already experienced the magic of vengefully flopping onto the shore to snarf down beachgoers will soon have a chance to do so. Did those tasty NPCs think it was safe to go back into the water? Ha! Even being inside a building won’t necessarily save them from this ticked-off eating machine. Video game villains, a word to the wise: don’t kill things for fun. That’s how you paint a target on your back–or boat, as the case may be.

In real life, sharks are unfairly slandered as mindless eating machines when they’re actually quite smart and serve a number of very important purposes in the oceans. An ocean without sharks is a very unhealthy place to live in or near, which may explain why the setting of Maneater is such a polluted hellscape. Either way, it’s a ton of fun to explore–and eat–your way through the gulf on a quest for revenge on the fisherman who killed your mother and left you permanently scarred.

The Switch version will feature: 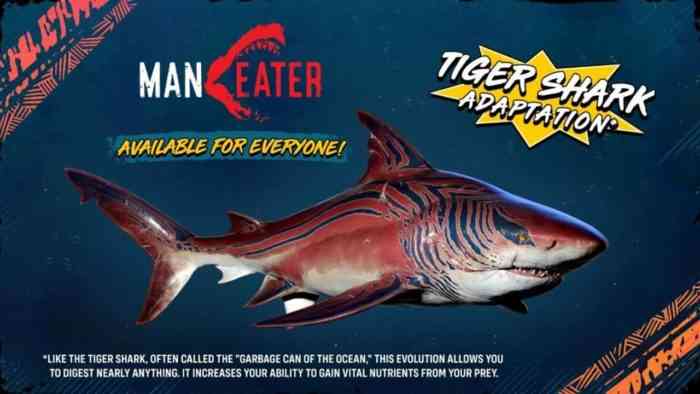 How much do you want to see more ShaRkPG games in the future? Let us know down in the comments, or hit us up on Twitter or Facebook.