Getting Awful Crowded in Here

Within the last week or so, we got news that Kratos from God of War would be joining the colorful cast of Fortnite characters, as well as confirmation that Master Chief of the Halo series would also be in the game. You may have missed it in all the Game Awards excitement, but our favorite The Walking Dead characters will also be coming to Fortnite! Okay, we know that TWD has kind of been on the outs lately, but it is hard for anyone to follow either Kratos or Master Chief, let alone both of them. 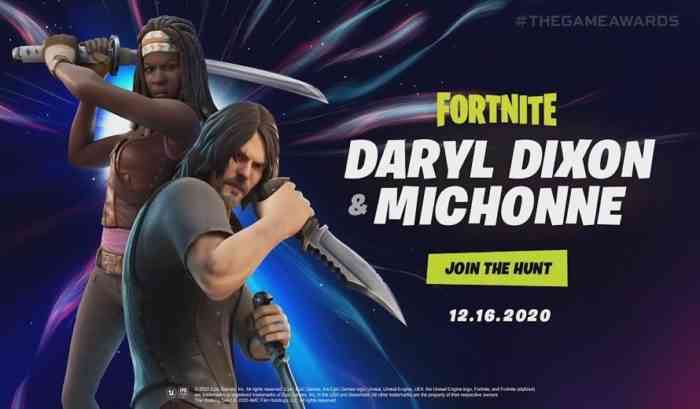 You can probably guess which characters will be crossing over, even without the images and trailer. Obviously, it will be Daryl and Michonne; the two most popular and constant characters. The trailer shows the two fighting off a bunch of walkers, when Jonesy appears from a portal in the sky. He quickly gets us and teleports Michonne and Daryl, bringing them to his world. At least they don’t have to deal with walkers anymore. The Walking Dead has crossed over with a few different games in recent years, such as PUBG and Brawlhalla.

Both Michonne and Daryl have a few different looks throughout The Walking Dead series, so it would be cool to see a couple of variations on their skins, but don’t count on it. The Walking Dead x Fortnite crossover begins next week on December 16th. Fortnite is available on PC, mobile devices, Nintendo Switch, PS4, and Xbox One.

Will you be getting these skins? Let us know in the comments below.