The Long, Long-Awaited Sequel is Coming For the Holidays

It’s been delayed. It’s been declared an exclusive. Now, it’s finally within reach. Meat Boy and Bandage Girl are back in Super Meat Boy Forever–and this time, they aren’t alone. In the time between Super Meat Boy and the new game, the two of them have built a family and had a child, named Nugget. Unfortunately, Nugget has been kidnapped by the evil Dr. Fetus. Now Meat Boy, Bandage Girl, and some unexpected new faces from the Meat Boy Cinematic Universe (totally a real thing) must jump, slide, plummet, and punch their way to rescue the kidnapped child.

“Super Meat Boy was a massive success that changed my life forever and people had been clamoring for a sequel for ages,” said Team Meat co-founder and programmer Tommy Refenes. “But I didn’t just want to deliver more of the same and call it a day. Meat Boy deserved more than that. I wanted to rebuild Meat Boy from the ground up, in a way that would offer an entirely new experience that still hits all the same kinetic, addictive notes as its predecessor. I know Super Meat Boy Forever took forever to make but we’re confident that it was worth the wait.”

Those are some bold words, but Refenes does have something big backing him up: procedural generation. What’s better than playing a video game once? Playing it over and over with new levels each time. Super Meat Boy Forever stands in defiance of the limits of ‘rational game design’ and ‘sensible production time’ and it’s paid off. Every time you finished the game, you’ll have the option to replay the game as a whole new experience. Each level has been lovingly handcrafted and there are thousands of them, which means you can play the game several times start to finish without ever seeing a duplicate level. That’s amazing. Team Meat, we salute you. 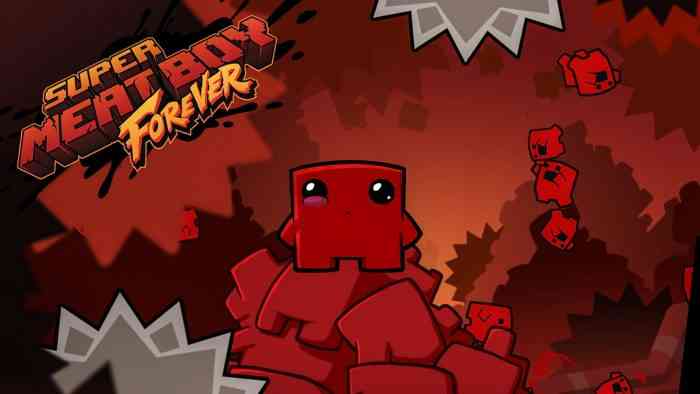 Super Meat Boy Forever will be available for PC on December 23rd, 2020.

Are you excited for this long-delayed sequel? Let us know down in the comments, or hit us up on Twitter or Facebook.