Despite WWE’s New Day recently losing Big E, the trio of Xavier Woods, Kofi Kingston, and Big E are officially all playable in Gears 5 thanks to new DLC. Woods has apparently been a fan of the Gears of War series for years, so joining the fight against the Locust Horde is another feather in his cap. New Day is available on Gears 5 through DLC until December 4th for $20 or through Xbox Game Pass Ultimate perks. Gears 5 is available for Xbox One, PC, and through the extensive Xbox Game Pass lineup. 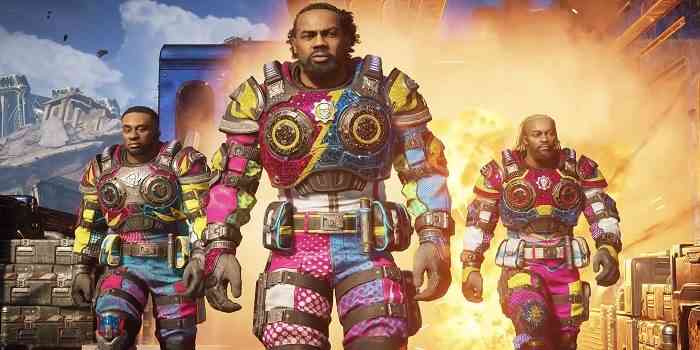 Gears 5 was recently updated to feature more Dave Bautista as he takes Marcus Fenix’s, and now more world-famous wrestlers have joined the fights against the Locust Horde. Gears 5 players who purchased the new DLC are already jumping into multiplayer games as Woods, Kofi Kingston, and Big E. These three new playable Gears 5 characters are available now for WWE fans to purchase and bring to the battlefield. This trio dons familiar COG armor, with their colourful pink and blue touch to it, so don’t expect to blend in with these characters.

“After playing Gears Of War for years (& reading the books) I’m happy to announce that myself, TrueKofi & WWE Big E somehow convinced them make us playable DLC characters in Gears 5,” said Austin Watson, aka Xavier Woods, on his official Twitter account. “If you thought getting popped by gnashers got on your nerves, wait until it’s us doing it.” While it’s nice to see more WWE characters in Gears 5, it’s even better to see that Austin Watson is such a fan of the series as well. We’re looking forward to taking the New Day into our favorite cover-based shooter.

What’s another WWE superstar that you’d like to see in Gears 5? What other game needs the WWE treatment? Let us know in the comments below!