The Newest Killer is Getting Some Serious Love

Considering the fact that The Blight was first mentioned in the very first tome of Dead by Daylight’s Archives – almost a year before his first appearance in game – and the fact that two Halloween events prior to his inclusion were based on a mysterious… well, blight in the foggy realm of the entity, it’s easy to forget that he’s only been an official part of the game for a few months. 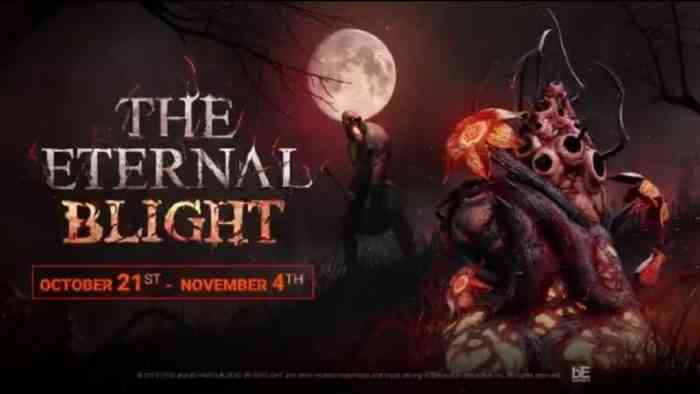 In that time he’s earned both love and scorn – his power, while underwhelming compared to “can teleport through walls” or “can stalk you, sneak up on you, and take you down with a well-timed stab”, is undoubtedly powerful in the right hands, and what he may lack in lethality he more than makes up for in map pressure, as his power lets him rush around the map, bouncing off obstacles and closing in for the kill.

Like last year’s Withering Blight, maps during the even will have blighted hooks and generators, both of which will offer more bloodpoints upon completion. As per tradition, we’re also getting new blighted cosmetics for some of the characters, with Feng, Yui, Felix, Ghost Face, The Legion, and The Blight himself getting new cosmetics, with the killers the victims of The Blights experiments. The Legion in particular looks grotesque: rather than one identity, The Legion is in fact four separate members of a young gang who were abducted into the entities realm at the same time after the leader, Frank, forced the others to stab a man he’d mortaly wounded so they’d share the punishment. In the realm they each share the same body, with each being selectable in the customization screen. Their cosmetic, Chimeric Horde, has each of them sharing the same body at once, with Frank in control, the others reduced to twisted faces and tangled limbs protruding from the body. They may be among the weakest killers in the game, but that’s not something you want to see in a dark alley.

What do you think of the new event? Let us know down in the comments, or hit us up on Twitter or Facebook.