You know it. We know it. The whole world quakes in fear of Red Hook Studios’s Darkest Dungeon as the corruption prepares to take on a brand new form. This gothic tale of a town slowly succumbing to a creeping, otherworldly horror and the family bound to it is about to become a board game. Darkest Dungeon: The Board Game hit Kickstarter earlier today and met its $300,000 US goal within an hour. Just goes to show to deep the rot has gotten. We won’t blame you if you wish to turn back, but if you do, you won’t get to hear the details of this victory for the dark… okay, okay, we’ll stop now. Seriously though, this version of the game looks every bit as grueling but enjoyable as the digital version. And just look at those miniatures! We want to take them home with us.

As of this writing, Darkest Dungeon: The Board Game has raised nearly 1 million dollars, proving exactly how beloved the game is. And no wonder–the new installment really does seem fun as all hell. The board game will be a cooperative dungeon-crawler for 1-4 players, with the average game session lasting 90 minutes and the ideal audience being 14 years or older. Like in the original, players will accept missions, fight monsters, and plunge deeper into the writhing dark than any mortal was meant to go. “But beware…” says the description, “either at death’s door or at your wit’s end, you will have to uproot evil itself from the Darkest Dungeon.” 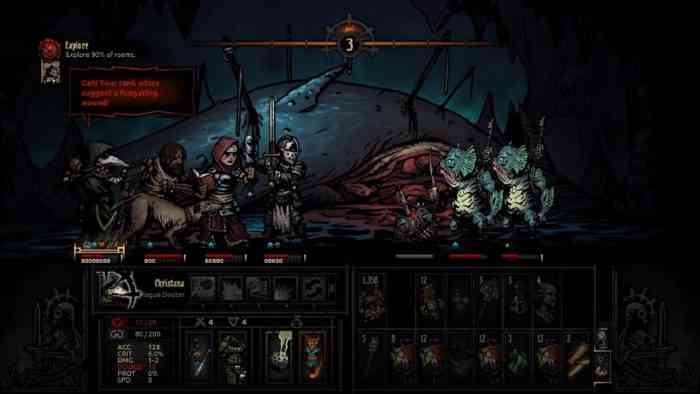 We’re sold already. But then, we like Darkest Dungeon, even if it did leave us feeling more defeated than any Dark Souls game. We were thrilled when it got a physical edition and we’re thrilled now. So clearly the corruption has already gotten to us. It’s too late. We’ve become a part of it. Save yourself.

Do you dare venture into the mouth of evil itself? Let us know down in the comments, or hit us up on Twitter or Facebook.

Darkest Dungeon 2 Is Coming to Early Access Next Week