Darkest Dungeon is a punishing experience, one that can be consumed for no more than a few hours at a time before an overwhelming sense of despair and loss takes over, much like the characters whose fates you control. I can’t think of a single game that has left me so utterly hopeless and defeated, and that includes any of the Dark Souls series.

Now, this may sound like a bad thing, but to be honest, it fits in perfectly with the world which Darkest Dungeon inhabits. The game begins with you being summoned back to an old family manor by an uncle who has taken his own life after obsessively exploring the depths underneath the keep and the horrors that lay within. It’s your job to piece together what has happened and clean up the mess left behind, all the while attempting to maintain your, and your companions, sanity.

“I can’t think of a single game that has left me so utterly hopeless and defeated, and that includes any of the Dark Souls series… but this is perfect for Darkest Dungeon.”

The game plays out as a rogue-like dungeon crawler, with you commanding a party of four through various levels of dungeons battling all manner of Lovecraftian style monsters in turn-based combat. What initially seems incredibly simple, turns out to be far deeper than expected. Resources during the dungeon crawl are eaten up quickly, particularly torches to light the way, and these supplies can mean life or death. Combat has its own quirks as well, occurring on a 2D plane with the order of your heroes determining their effectiveness. While each character has a limited set of skills available, combat scenarios also take into account speed, dodge, protection, buffs, reach, and even stress which can be one of the most deciding factors in a battle.

Not only do you have to manage the health of your party, but also their mental health, as constant exposure to the horrors of the deep wears away at their sanity. As characters become more unstable they become less effective fighters and are more likely to miss attacks, take more damage and impact the team morale. Keep them stressed long enough and they may end up with lasting phobias and even have heart attacks. The element of stress and lasting impacts is what ultimately ends up defining your rotating group of heroes, rotating because many will die in the process, but many more continue to flood in from the home base, looking for fame and fortune. 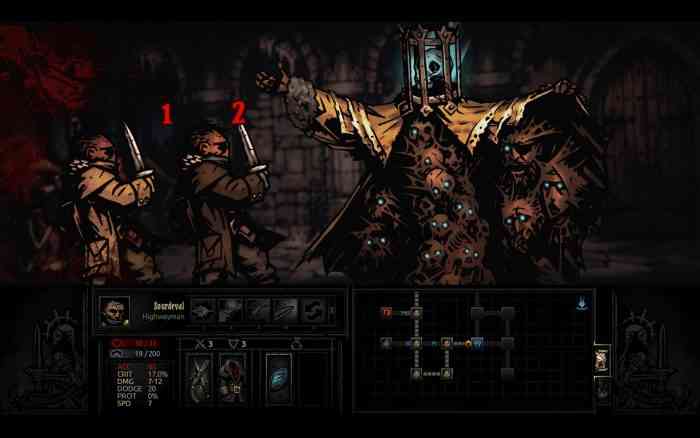 It’s at the manor where you have a chance to prepare and upgrade your heroes. Various shops and services will increase equipment, skills, recruit new warriors, reduce stress and heal ailments. Resources are exceptionally limited, though, so it’s a delicate balancing act of where best to spend that hard earned coin. Building out the manor is a slow and arduous process, and can feel almost overwhelming at times. Want to upgrade that blacksmith? You might need to slog through several dungeons with the pitiful weapons you have now to earn the treasures you need to build out. Nothing feels easy, and everything is a hard earned fought.

This is also unfortunately true of the controls. With Darkest Dungeon originally on PC, the playstyle and complex controls work well for a keyboard/mouse combo. The translation to PS4 has been a little less than ideal, and controls are not intuitive. I was frequently forgetting how to access certain inventories and character screens, it amounts to an added layer of frustration to an already stressful experience.

“It’s easy to get drawn into the deepest caverns of despair with Darkest Dungeon, but there is always a glimmer of light at the end of the tunnel.”

This also goes for the lack of tutorial or explanations. I was easily 5 hours into the game before I discovered how to equip special relics onto my characters, and it took equally as long to start understanding the meaning of the statistics and traits each unique character possesses. The fact the game is punishingly hard and provides little direction will be a turnoff for some players.

Darkest Dungeon is a grim game. The tactical strategy of both the combat and resource management comes with tension and complexity. This is not a foray into casual gaming, even dedicated Dark Souls players will find Darkest Dungeon a nightmare at times. It is, however, a rewarding experience and one that is full of character and excellent narration. It’s easy to get drawn into the deepest caverns of despair with Darkest Dungeon, but there is always a glimmer of light at the end of the tunnel.