Instead of trying to talk around the obvious, I’ll just mention that Warhammer: End Times – Vermintide is a pretty shameless derivative of Valve’s Left 4 Dead series. That’s not necessarily a bad thing, however, as Left 4 Dead 2 released in 2009. There really haven’t been any games that have scratched that particular co-op itch since, so there’s a real opportunity for Vermintide to fill that niche.

When I say it’s a shameless derivative, I mean shameless. Everything from the healing mechanics to the special monsters that randomly show up during levels are virtually identical except players are battling rats (called Skaven) instead of zombies. Four of the five types practically mirror the abilities of the Smoker (which strangles enemies from afar), the powerful Tank, the poisonous Spitter, and the lounging Hunter. The only real unique special enemy is a turret-carrying rat that can quickly kill players.

Despite the hard-to-miss similarities, Vermintide does have a few unique ideas that help it stand on its own. The big one is that each playable character plays differently, as they fall into separate classes. There’s a powerful dwarf that wields a giant hammer and uses a bow as a ranged attack, a swordsman who also carries a blunderbuss, and three other classes that have various skills. All of the characters can be further customized as the game adds in various role-playing elements such as loot and special skills that can be equipped before a level. While I didn’t really care for the class system (mainly since two players can’t be the same hero), I thought that loot was a smart addition even if it didn’t drive me to replay levels.

“Warhammer: End Times – Vermintide is a solid attempt at replicating the Left 4 Dead formula, but it also misses the mark in a few key areas.”

Speaking of the levels, Vermintide is split into small bite-sized levels instead of multi-part campaigns. As a result, I didn’t find any of these short 15-minute chunks to be very memorable. My crew would just run through an environment filled with groups of rats, occasionally interact with objects that would cause a horde of foes to attack, and then escape in the back of a vehicle. There’s some variety, such as having to collect items in a location, but this is all stuff that Left 4 Dead 2 did seven years ago and the level designs aren’t nearly as interesting here. 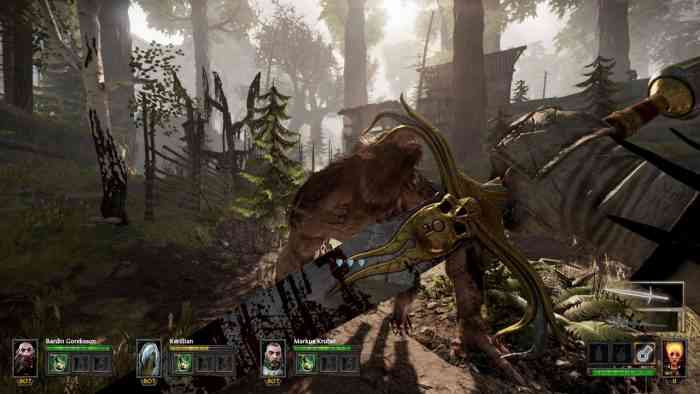 The other big issue that keeps Vermintide from really reaching its full potential is the online play. A patch recently busted the matchmaking, although another patch finally fixed it. Due to these issues, though, nobody is playing online. I rarely could find players to group up with in the levels I wanted to play and often had to settle for bots (although players could join in while I played with the AI). Not being able to easily play with other humans really hurts the overall appeal, and I can’t imagine coercing my friends to purchase Left 4 Dead clone that isn’t as good as the game it is imitating.

Warhammer: End Times – Vermintide is a solid attempt at replicating the Left 4 Dead formula, but it also misses the mark in a few key areas. If anything, it made me really want a proper follow-up to Valve’s series, as this only irritated the itch instead of soothing it. Warhammer fans will find a fun cooperative romp here, but one that feels like it could’ve been much better.