Upcoming Doom Eternal DLC Will Be Shown at Gamescom

After confirming that Doom Eternal is coming to Xbox Series X and PS5, Bethesda also confirmed the Doom Eternal DLC coming soon known as The Ancient Gods. The DLC will be revealed more thoroughly at Gamescom Opening Night Live on August 27th but Doom fans got a teaser of what to expect during QuakeCon. The Ancient Gods is going to be released in two parts but the teaser focused on the first part of the DLC. Doom Eternal is available for Xbox One, PS4, Nintendo Switch, Google Stadia, and PC right now. 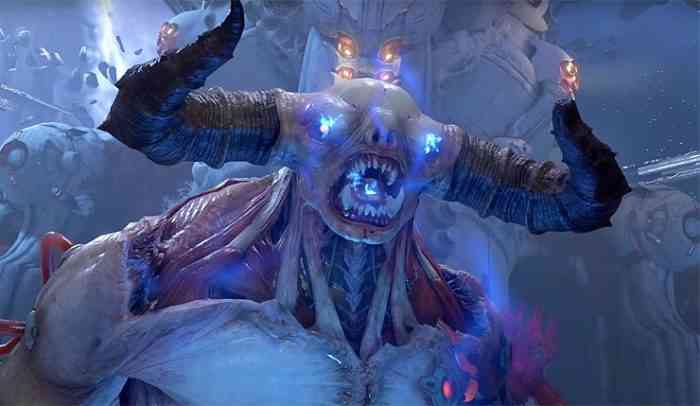 Bethesda and id Software are celebrating QuakeCon 2020 like many other studios these days, with an at-home presentation and the latest Doom Eternal DLC news is one of several things happening this year for QuakeCon. Considering Doom Eternal has been officially confirmed for next-gen, it’s likely the DLC will release around the same time as the Xbox Series X and PS5. The Ancient Gods DLC is focused on the story, furthering the campaign set by Doom Eternal.

Geoff Keighley recently took to Twitter to express his enthusiasm for Bethesda and id Software’s QuakeCon announcement, saying “don’t miss the world premiere of The Ancient Gods Part 1, the new campaign expansion of Doom Eternal during Gamescom Opening Night Live, streaming live on August 27!” Considering QuakeCon is id Software’s baby, it’s interesting to see only a teaser for Doom Eternal The Ancient Gods DLC at the event and that fans have to wait until Gamescom to hear more. Summer Game Fest continues to bring those E3 quality announcements to various online platforms.

Will you be playing Doom Eternal on next-gen or trying the DLC on current-gen? Let us know in the comments below!

Crypt of the NecroDancer: Synchrony DLC Launches Into Early Access
Next
Apple Is Blocking Microsoft’s Project xCloud
Previous
Transport Yourself To Valhalla with This New Assassin’s Creed EP