The developers behind Words With Friends, a popular mobile title, have teamed up with Amazon to bring a spinoff title to their virtual assistant AI. The new spinoff title is known as Word Pop and it’s exclusive to Alexa, while being entirely controlled through voice commands. Words With Friends is a popular mobile franchise, with two games available for Android and iOS, but the move to Alexa makes it one of the first big names in the mobile market to transition over to virtual assistant AI. Word Pop is currently available exclusively on Amazon’s Alexa, but it may come to Google Home or other smart home devices in the future. 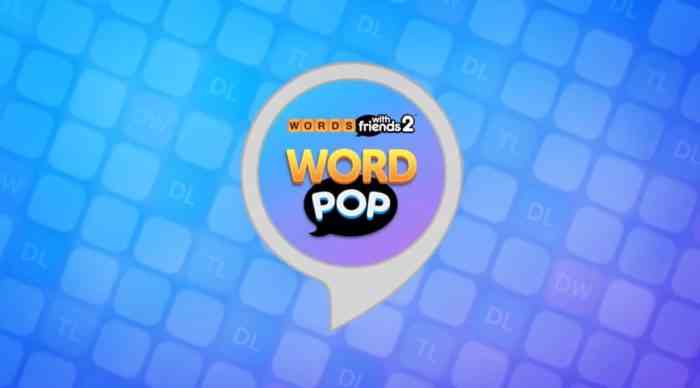 The gameplay of Zynga’s Word Pop involves spelling out as many words as possible from a randomly generated series of letters as well as a lot of blank spaces. Using voice commands, gamers playing Amazon Alexa’s exclusive title will tell the virtual assistance AI which words to create with the letters. It is important that the gamers are well versed in spelling but an extensive vocabulary isn’t necessarily important in playing the free spinoff game.

There’s a one minute timer for Word Pop that makes Amazon Alexa owners scramble to create as many words with the randomly generated letters as possible. While this may sound familiar to fans of the mobile title, Words With Friends or its sequel, having to use voice commands to create the words is a nice touch with this Alexa exclusive. Considering how popular Zynga’s mobile Words With Friends games are, Word Pop will likely find a sizable following on Amazon Alexa as more owners of the AI discover it while browsing free apps.

Will you be playing Zynga’s Amazon Alexa exclusive Word Pop? Let us know in the comments below!