While rumors about Pokemon Diamond & Pearl remakes have been circulating for a while now, Pokemon fans who follow the official Twitter account are giddy after a recent announcement. The Pokemon Twitter account announced that it’s been exactly thirteen years since Pokemon trainers first visited the Sinnoh region. With Pokemon Sword & Shield still receiving their expansions, it’s possible that fans are just grasping at straws but we hope to hear more from the Pokemon Company soon, better or worse. The most recent Pokemon remake was a remake of Yellow for the Nintendo Switch known as Let’s Go Pikachu & Let’s Go Eevee which are available for the hybrid console now. 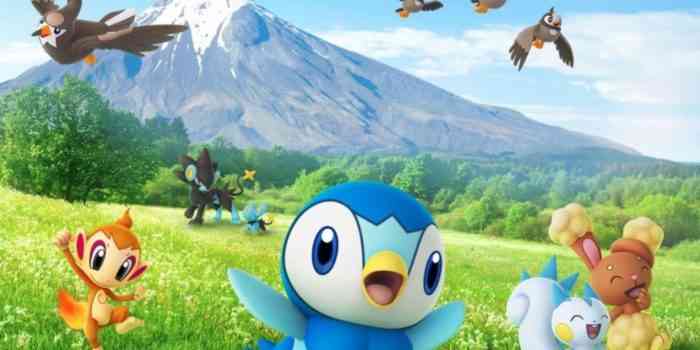 “Confirmed: North American Trainers first visited the Sinnoh region when Pokémon Diamond and Pokémon Pearl released on this day in 2007! Did you prefer to test your Pokémon’s strength in the Battle Tow).” While it’s possible that this is just a way to celebrate the fourth generation of Pokemon through Twitter, Pokemon fans are hoping it’s a subtle nod towards an upcoming remake treatment similar to the one Pokemon Ruby and Sapphire got on the 3DS or Yellow received on the Nintendo Switch.

Pokemon games have been remade for generations now, starting with the remake of Red and Green for the GBA known as FireRed and LeafGreen respectively. While we don’t expect them to see the sequel treatment that Ruby and Sapphire received, we hope to see remakes of Diamond and Pearl release for the Nintendo Switch before its successor is announced. Remakes are a good way for Nintendo and Game Freak to pad out some quieter years before mainline releases and it’s possible Diamond and Pearl will be remade before the next gen arrives.

Would you like to see a remake of Pokemon Diamond and Pearl? Let us know in the comments below!