If you haven’t heard of Pokémon shame on you, even people living under rocks have heard of Pokémon. Pokémon is the phenomenally popular creature-fighting turn based RPG that set the world on fire back in 1996 and has been a powerful force in gaming ever since; with no fewer than three entries on each Nintendo handheld machine since the original Game Boy. It is a simple premise but with deep gameplay which allows for Pokémon to appeal to an incredibly wide audience and keep them coming back generation after generation. I personally know at least ten people that all play Pokémon for different reasons. In fact, the vast array catchable monsters in each game are so big that Pokémon may even possibly hold the crown of most replay value for any game ever. That’s an impressive feat.

So how does a game that’s been getting a yearly release since Boom Boxes, Frosted Tips, and tear-away pants were relevant keep things feeling fresh? From an outside perspective that might be a hard one to answer. The absolute truth of it is that the core game play hasn’t really strayed from its original formula at all. Over the years Pokémon has added little things here and there that add to the depth of play, but they don’t actually seem like much unless you really get down to the nitty gritty. Casual passers by will see things like Double and Triple Battles or they’ll see things like the Pokedex roster having hit the 750 monsters mark. But for those who not only play, but live these games, they know all about stat calculations, natures, IV’s, EV’s, egg moves, and probably have the entire weakness / resistance / immunity chart memorized better than the countries of the world. Pokémon has amassed an avid following, and an even more avid competitive scene where all of these cloak and dagger mechanics come to life and see the light of day. 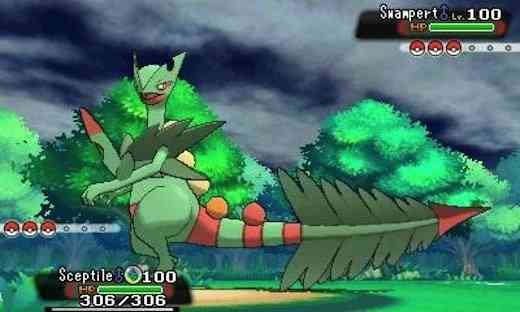 Despite the core gameplay in Pokémon games never really changing much from game to game, Game Freak does an amazing job of keeping things feeling fresh with a new user interface each time. Each new entry into the series since Diamond and Pearl have used the touch screen in new and interesting ways to add tinier gameplay nuances that help give each Pokémon game its identity. That brings me to Alpha Sapphire and Omega Ruby, remakes of Sapphire and Ruby released 11 years ago in North America.  What the remakes bring new to the table is the PokeNav. The PokeNav is a sort of traveler’s tool that helps the you with a number of different “apps”. In addition to your standard Pokedex, you’ll get the DexNav. DexNav is a handy device that will show you tiny little map of the area you currently occupy overlaid with a number of blank silhouettes of the obtainable Pokémon in that space. As you catch Pokémon, these silhouettes fill in. When all of the Pokémon in a given area are captured, you’ll be awarded a little medal in the top corner of your map to alert you of his. Gone are the days of scouring grass in search of those “I dunno…maybe I missed something” things.  Another important app on the PokeNav is the PlayNav. PlayNav features a number of the tools added in Pokémon X and Y, namely Super Training, Pokémon Amie, and the GTS. No trainer is complete without these. And more importantly, no Sylveon is obtainable without them either! PokeNav also features AreaNav, which effectively functions as your world map, so you have no excuses for getting lost.

This may seem like a laughable fact for anyone that hasn’t been in contact with these games for some time, but another more recent way that Pokémon has kept itself fresh is with its visuals. In its early days, Pokémon battles were conducted between simple sprite pictures on a blank white background. Interestingly enough, it was the original Ruby and Sapphire that changed this by adding environment themed backgrounds. The motionless sprites however stayed the same. Fast-forward to present day and you’ll see that in the past four years we’ve gone from simple sprites to fully rendered 3D models complete with several different attack animations. This looks especially impressive with the 3D slider cranked to max. It should be noted that like its predecessors X and Y, the 3D effect is only operational during battles. The over world is relegated to 2-dimensions like the old days. The menu and battle screens have also seen a change in art work from X and Y. Alpha and Omega’s menus look more mechanical and angular by comparison. As they always are, colors are used to represent different menu options and help the bottom screen to really pop. 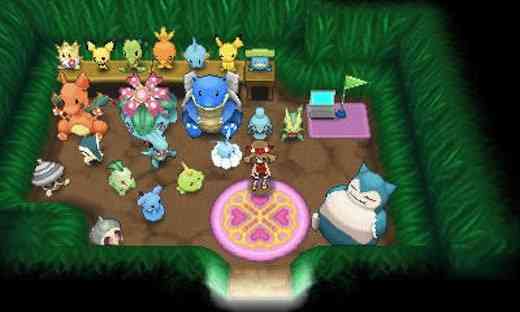 For anyone that’s played the original Ruby and Sapphire on Gameboy Advance, you’ll be immediately familiar with the music in Alpha and Omega. Each piece is a wonderfully re-mastered version of the music found in the original games. This jazzy soundtrack has been given new life and depth to its old classics, improving but not changing the feel of these tunes. Unless my ears were lying to me, the trainer battle music has some violin thrown in, which adds a certain classy-yet-epic tone.

Admittedly, I have a bit of a personal bias against Ruby and Sapphire. As a series, I love Pokémon to bits. It’s hands down my most played game series on a handheld and has helped me through a number of very boring road trips to places I couldn’t care less about, but when the original Ruby and Sapphire came out they didn’t sit well with me. It was the first game that wasn’t compatible with its predecessors, and because of this left you in a place where a number of Pokémon simply weren’t attainable; of which all of my favorites were included. It left me feeling excluded. That coupled with a HUGE number of new game mechanics I didn’t quite understand, and a region with altogether WAY too much surfing, Ruby and Sapphire went directly into my black book, and I went back to Gold and Silver until the launch of Fire Red and Leaf Green. Of course, as I grew up a little, I tried them again and they weren’t so bad. The wounds healed and I forgave. And now I find myself in 2014 with a shiny new 3D remake and everything is okay. Everything is more than okay. I can finally go out into the Hoenn region and discover the magic that it was supposed to have all of those years ago. And believe me, from one Pokémon master to another, the magic is there. All you have to do is go out and look in every blade of grass.