A new mythical Pokemon, Zarude, has been revealed for Pokemon Sword and Shield. The announcement is part of The Pokemon Company’s Pokemon Day celebrations. Pokemon Day is February 27. 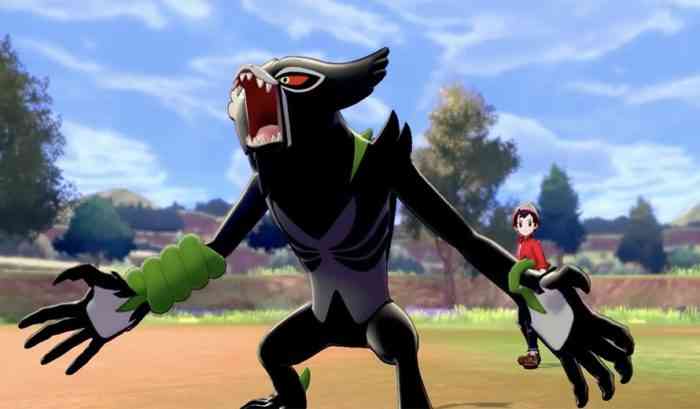 The new Mythical Pokemon was revealed with a trailer that launched today. Zarude is a Dark/Grass type Pokemon. The new Pokemon is a large creature with a height of 5’11”. The “rogue monkey” has a predominantly black and white colour scheme. The trailer shows the mythical Pokemon running around and battling various other Pokemon within the game.

The Pokemon Company has included a Pokedex-style description along with the trailer.

“Zarude is a Dark- and Grass-type Pokémon that can grow vines from the back of its neck, its wrists, and the soles of its feet at will. The vines are strong and flexible and are useful for many different situations. They can be used to wrap around tree branches to move around and grab Berries from distant branches, and they even have healing properties.”

The announcement does not make it clear how players can capture their own Zarude, but it does state that the new creature “can’t be encountered in regular gameplay.” It is possible that Zarude may be included in the Expansion Pass content for Pokemon Sword and Shield.

Next Dead By Daylight Chapter Could Be Inspired By For Honor
Next
Dynamax Mewtwo is Coming to Pokemon Sword and Shield
Previous
Warframe Joins Super Smash Bros. Ultimate