The ARMS Fighters Are the Next Super Smash Bros. Ultimate DLC

During the recent Nintendo Direct Mini it was announced that the next DLC fighter for Super Smash Bros. Ultimate will be various ARMS fighters. Accompanying the announcement, Nintendo has made a free game trial for ARMS in which gamers can check out the various characters coming to Smash in June. The free trial is live on the Nintendo eShop right now and it will last until April 6th, giving Smash fans a lengthy amount of time to try the early Nintendo Switch exclusive fighter. 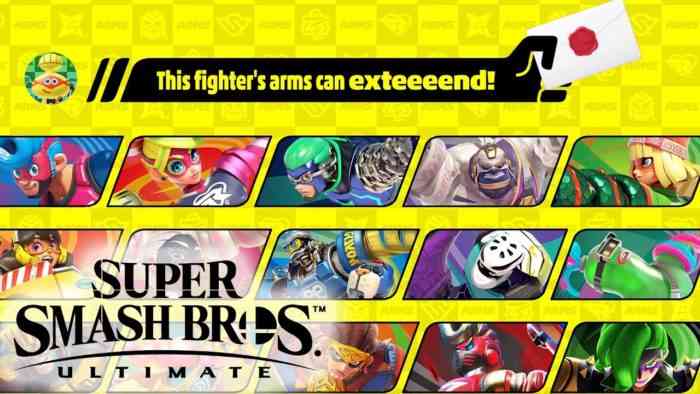 The upcoming ARMS character part of the next Smash Pass will feature many variants in an effort from Sakurai to put several of the characters in its roster into Super Smash Bros. Ultimate. Considering both titles are fighting games, we think that the expandable armed characters will transition as effortlessly to Super Smash Bros. as Ken and Ryu have. A Nintendo Switch Online account is required for access to the free trial to ARMS but, let’s be real, most Smash fans already have that, especially if they already have the first Smash Pass.

ARMS originally released months after the Nintendo Switch released and since then, the title has kind of died down. Since it released, Nintendo has added new modes, fighters and ARMS through regular patches that balanced the gameplay as the game evolved until Nintendo stopped updating it in December 2017. Nintendo is likely looking to introduce new fans to both games, with Smash fans checking out ARMS and ARMS fans checking out Super Smash Bros. Ultimate. It’ll be interesting to see how the Smash developers implement so many of the ARMS characters into the roster as if they’re different coloured tunics for Link.

What’s your favorite Super Smash Bros. Ultimate DLC character and why? Let us know in the comments below!