Buy a Girl a Drink?

We are hit with a flood of Borderlands related news in the past few days and not everything has been covered. Apart from the playable content like the Guns, Love, and Tentacles DLC and the upcoming Revenge of the Cartels event, there is also an update to the ECHOcast Twitch extension. In this unique extension, viewers watching a streamer play Borderlands 3 can earn loot that the streamer also finds, as well as influence the difficulty of the enemies they face. In this new update, they can also buff players with Borderlands 3 Moxxtails. 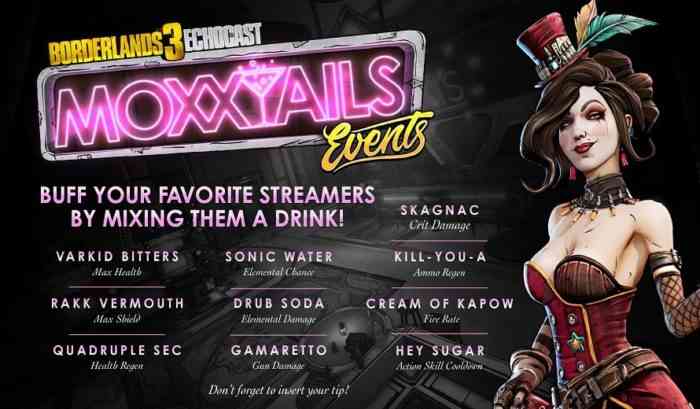 Moxxtails may be familiar items to some fans. They first appeared in Borderlands: The Pre-Sequel, which could be purchased from Moxxi’s Up and Over Bar in Concordia. They cost 10 Moonstones each (10 in True Vault Hunter Mode) and would give players a variety of bonuses. Though the drinks on the ECHOcast extension are different from the ones in Concordia, some of them have the same effects, including ones that increase Max Health, Health Regen, Ammo Regen, Gun Damage, and Elemental Chance. The Moxxtail that the streamer gets is directly affected by how many bits that the viewers cheer.

The process sounds kind of convoluted, but here’s how it works. The streamer sets a threshold of bits to activate the event. Once that is hit, Moxxi will open up the tip jar, which viewers can pile their Bits (of Sugar) into. Once all the Bits of Sugar are collected, the audience will be able to choose which buff the streamer gets. The most popular effect will be the main ingredient in the drink, but the second most popular will be a less powerful ingredient. The more bits the chat cheers, the more powerful the Moxxtail is. There are 5 ranks that the drink can achieve, growing more powerful with each rank. Moxxtails were activated alongside the launch of the new DLC. Borderlands is available on PC, Stadia, PS4, and Xbox One.

Which Moxxtail do you think is most useful? Let us know in the comments below.