During Nintendo’s recent deep dive into the latest Super Smash Bros. Ultimate Fighter Pack character, Terry Bogard, they revealed that the new character would be releasing today. Terry belongs to SNK’s Fatal Fury franchise and his various moves and abilities were showcased on the Smash Bros. director Masahiro Sakurai led video. Also included in the video were his different outfits as well as Kirby’s appearance after taking on the powers of Terry. With the new character releasing comes a new map called the King of Fighters stadium. Terry Bogard is as available stand alone DLC or is included in the Fighters Pass as the last character of the season. 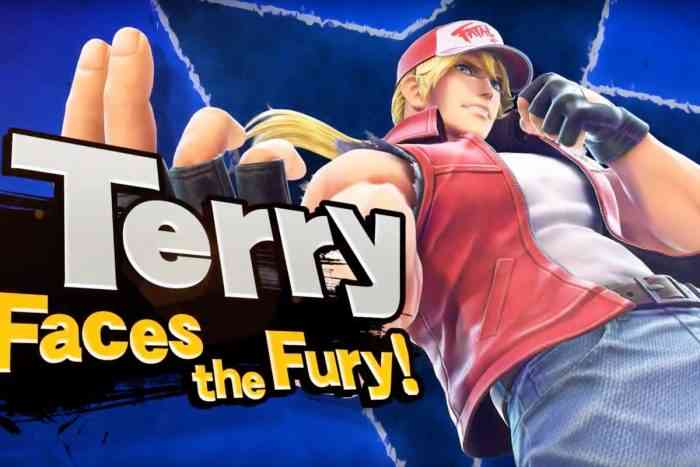 Terry Bogard joins the current ranks of DLC characters in the Fighter Pass: Banjo& Kazooie, Hero and Joker. Each of the DLC characters bring their unique quirks and each are special to their franchises with dedicated fan bases. Our favorite DLC character to play as so far is Hero because of the random nature behind some of his abilities and the variation of outfits for him.

Tailing Terry Bogard as he enters the Smash competition comes a staggering fifty new tracks being added from a variety of other franchises. There’s also a new Spirit Board with a plethora of new spirits to unlock. SNK will be receiving it’s own Spirit Board event where gamers can unlock SNK specific spirits for a limited time. We’re excited to hear which tracks are being added to Super Smash Bros. Ultimate but remain impressed by Nintendo’s dedication to adding content to an already immense game.

Who’s your favorite Super Smash Bros. DLC character so far and why? Have any of the DLC stages really impressed you or do you prefer one of the other 100+? Let us know in the comments below!