The Pokemon Company recently announced they’ll be collaborating with Snow Miku, featuring its global IP and Vocaloid singing sensation Miku Hatsune. The collaboration comes to Hokkaido, Japan as part of their Snow Festival which takes place on February 4th, 2020 all the way to February 11th, 2020. the Hatsune Miku character Snow Miku and Pokemon’s Alolan Vulpix, the official ambassador to Hokkaido will collaborate for the first time during this unique event. This event will include various merchandise based on both Snow Miku and Alolan Vulpix so if you’re a fan of both, this is your chance to let Hokkaido know. 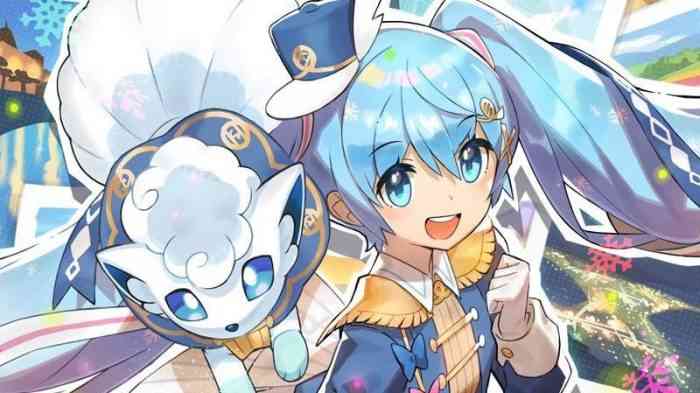 Considering this collaboration is official, I guess we now know that if Snow Miku was a Pokemon trainer, her starter would be Alolan Vulpix and we have to say that the combination works wonders. Snow Miku is based on ‘Hatsune Miku,’ and was created for “Sapporo Snow Festival 2010.” Since then, the character has gone through several transformations in celebrating wintery events in Japan, including the upcoming Hokkaido Snow Festival. Her design for this year features a Music instrument theme that’s apparently evocative of Hokkaido snow and Alolan Vulpix will surely add to that.

According to the NPD for the month of November, Pokemon Sword was the third best selling game, the double pack which includes both titles was in fourth place and Pokemon Shield came in at fifth place. Apparently, if the sales numbers are combined to reflect this generation of Pokemon as a whole, then in total it would bring them to the number two spot. In Famitsu sales charts, Pokemon Sword and Shield have sold over two million units in Japan alone. The popularity of Pokemon and Snow Miku will likely drive fans from the region to Hokkaido Snow Festival 2020 in droves.

Are you going to attend Hokkaido’s Snow Festival 2020? Do you prefer Alolan Vulpix or the standard one? Let us know in the comments below!