October’s Game Pass Titles Include The Outer Worlds and Stellaris

Microsoft has unveiled their new titles coming to PC Game Pass in October, including the day one release of The Outer Worlds. Though the PC version of Game Pass is newer than the Xbox One counterpart, it’s still getting a solid lineup of titles to play on your PC or on the go with a laptop. The expansion of their PC Game Pass is adding more value to Microsoft’s gaming subscription service which is available for $5 per month on PC or $15 per month for Game Pass Ultimate but it often receives discounts. 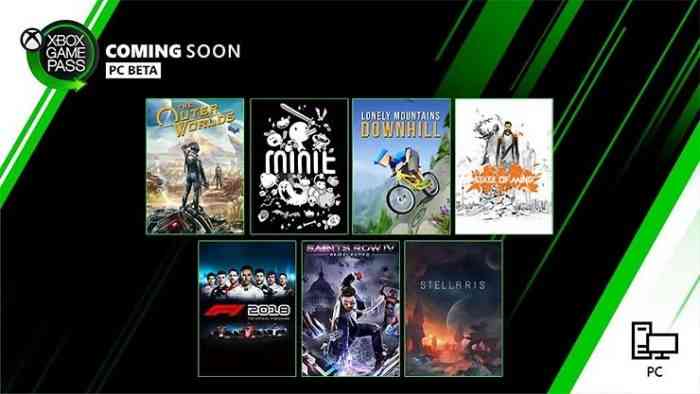 The list of games coming to the PC Game Pass subscription are:

The Outer Worlds is developer Obsidian Entertainment’s latest single-player first-person RPG which has gamers hopping between planets and competing with various factions as the story unfolds. Stellaris is another journey through the universe with this one being a constantly changing RTS, developed by Paradox Interactive. F1 2018 is the recent Formula 1 racing title which features the Circuit Paul Ricard for the first time in F1 gaming.

Lonely Mountains Downhill is a stunt biking game where racers navigate through dense forests, narrow trails, and raging rivers with various ramps to get sick air off of. Saints Row IV: Re-Elected is a bundle that includes Saints Row IV and all of the DLC made for it in one package. Saints Row IV has the 3rd Street Saints defending the Oval Office and the Earth from an alien warlord named Zinyak. Finally, State of Mind is a muli-layered sci-fi thriller with a dystopian storyline that combines low-poly characters with realistic environments in an exciting action-adventure.

Do you play Xbox Game Pass or just the cheaper PC alternative? Which of these games are you excited to play on PC Game Pass? Let us know in the comments below!

Starfield Getting Delayed Was the ‘Right Thing to Do’
Next
Dragon Age: Inquisition Developer Talks About Ridiculous Sex Scenes
Previous
The National Health Service in the UK Plans to Open Up a Video Game Addiction Clinic