This is Where the Magic Happens

Dragon Age: Inquisition was released all the way back in 2014 and it was universally loved. It had a great combat system and a compelling story. However, it also had some of the most gut-busting, laugh out loud sex scenes ever in a video game. 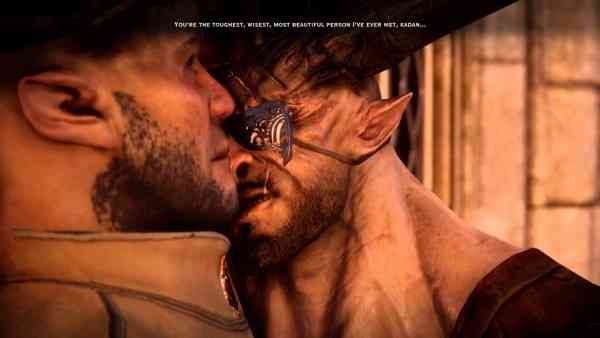 You could pretty much get freaky in the sheets with just about any single one of your companions. Man, woman, or weird beast thing with horns. Chances are if you could have a deep dialogue with an NPC you could have sex with it.

John Elper, one of the lead designers of the game took to Twitter to share stories about these infamous sex scenes in Dragon Age: Inquisition. The most famous and memorable (or traumatizing) of the romantic encounters was with Iron Bull. The scene consists of the main character and this bizarre-looking half man, half beast, half-demon, get down and dirty. What makes it even better it that the rest of your companions all walk in on you guys in the act. Making it all that much funnier.

Elper said that this scene was one of the most fun to work on due to how over the top it was. The tower where you and Iron Bull can make sweet love has no door and only a staircase. This is totally by design. Another little easter egg is that the developers placed an oil painting in the room with a scowling old man looking down at the bed. This was also purposely added. According to Elper the oil painting is supposed to look down in disappointment at the player and Iron Bull.

However, Elper seemed hell-bent to adding this love scene with Iron Bull. He had to allegedly fight with other team members to keep it. Thanks, John Elper.