A New CCG Enters the Ring

There are many CCGs out there but Mythgard‘s unique setting sets it apart from others. Rhino Games’s first foray into games (though the team is made up of game industry veterans), Mythgard is a free-to-play online CCG similar to Hearthstone and Magic: The Gathering but without the high fantasy trappings. 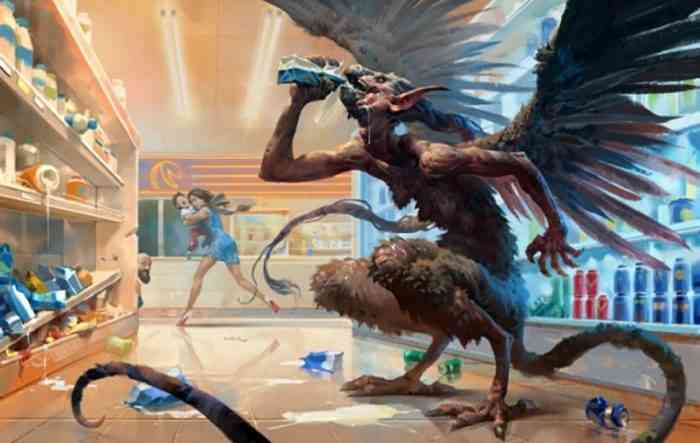 Mythgard finds itself in a world that mixes the modern world as we know it with powerful magical creatures left behind by powerful deities. The setting is inspired by television and comic series like American Gods, Grimm, and Fables. Even just a quick trailer reveals a dragon eating a plane, a metal concert with magic, and much more sci-fi and fantasy blending.

The initial Alpha was released in July of 2018 and the team at Rhino continued to work on it. Along with a brand new gameplay trailer (seen above) Mythgard is open for a round of Betas, so players can log on right now and see what’s waiting for them.

The game boasts 400+ unique cards with gorgeous art. As for gameplay, there will be solo, 1v1, and 2v2 play, and will have a spectator mode as well as a unique Mythgard Twitch extension for streamers. Additionally, Mythgard will have a solo story campaign, draft, and rank modes so there will be multiple ways to play. Players’ accounts will be the same across mobile devices and web browsers.

Mythgard launches September 19th and on PC, Mac, Android, and iOS. You can follow updates from the devs on their official Twitter.

What do you think of this newest CCG? Are you excited about the setting? Are you looking forward to scratching that pack opening itch? Let us know in the comments!