Next Week You Can Contribute to the Bloodborne Board Game Kickstarter

It seems like a bunch of video game titles are making their way back to tabletop form. It’s not exactly a brand new thing though. Games like Dark Souls, Fallout, Halo, Doom, StarCraft, The Witcher, and XCOM all have board games. At PAX East, Borderlands joined the club with Tiny Tina’s Robot Tea Party, as well. Now, we have a Bloodborne board game on its way, but will it be as cruel as its video game counterpart? CMON is spearheading this board game, and they already have made a Bloodborne card game, so they are familiar with the game. 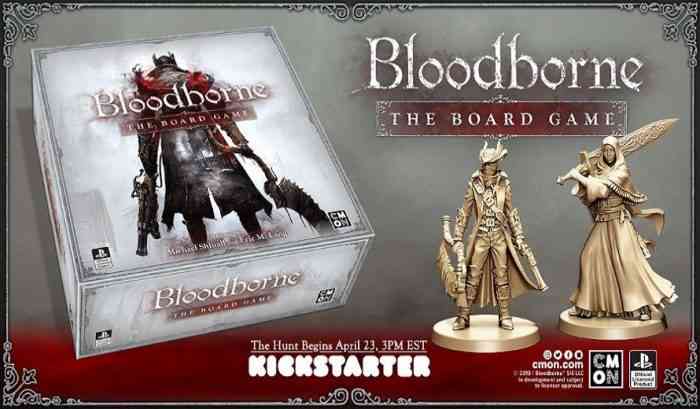 This board game isn’t ready to be shipped just yet. Next week, fans will be able to fund the process on Kickstarter. The crowdfunding campaign begins on April 23rd. If you are not sure about it, CMON released a trailer for the board game. It features tie-ins to the video game. Characters, locations, monsters, weapons, and combat techniques are shared between the two mediums. The trailer cuts between board game features and the video game footage of the action taking place. Some tabletop tie-ins have very little to do with the source material, but it seems CMON is really taking their cues from the digital medium.

The Bloodborne board game plays as a tile-based game. Players will move around the area entering and discovering new tiles, fighting whatever awaits. Cards are drawn for quests, combat, and other decisions. Players are not required to know all about Bloodborne, but fans will appreciate what the board game borrows. Bloodborne: The Board Game’s Kickstarter starts up on April 23rd.

Will you look into the board game? Let us know in the comments below.


Eastward Collector’s Edition Comes With Its Own Board Game

Bloodborne Comic Series Launching May 2022
Next
Rockstar Games Artist Has GTA 6 on Their Resume – How Far Along Is It?
Previous
DLC Characters Found by Datamining in Mortal Kombat 11 Leak [Spoilers]