Borderlands Returns to the Original Gaming Platform: The Table 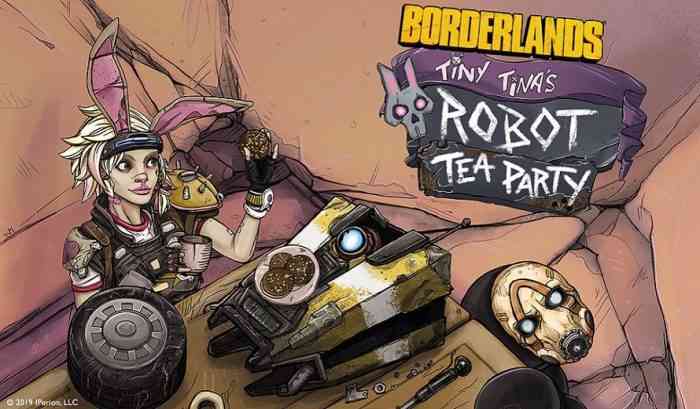 The board game is called Tiny Tina’s Robot Tea Party. It stars everyone’s favorite adorable little psycho and everyone’s not-favourite uni-wheeled robot. The concept and name is in reference to the Tiny Tina missions in Borderlands 2 when the player first meets her. The premise of the game is for players to be the first to create their own Claptrap robot to fill the final guest spot for Tiny Tina’s Tea Party. Players must not just be build their claptrap the quickest, but they must also use abilities to prevent other players from making progress in their own build. Tiny Tina’s Robot Tea Party has been made by Gearbox and XYZ Game Labs.

I guess it does not take as long to develop board games as it does video games. despite being announced two days ago, Tiny Tina’s Robot Tea Party can already be purchased. PAX East-goers can buy it at XYZ Game Lab’s booth in Boston. If you are not there, it can also be ordered on the official website. “WHO’S READY FOR A MOTHA-HUMPIN’ TEA PARTYYYY?!”

Does this board game tickle your fancy? Let us know in the comments below.

How To Beat Dragon Lord in Tiny Tina’s Wonderlands
Next
Here Are The 10 Best Game Deals on PS4, Xbox One and Switch This Weekend That You Don’t Want to Miss
Previous
We’re Getting So Many Tokyo Olympics Games This Year