Rockstar Games Artist Has GTA 6 on Their Resume – How Far Along Is It?

This Is like the Resume Equivalent of Playing Exodia, the Forbidden One

Imagine you have this great idea for a game, but you need an artist to bring it to life. A man walks into your office and shows you his resume. It says he worked on GTA 6?! Boom. You’re sent to the Shadow Realm. Well, it didn’t go exactly like that. Bibin Michael, who worked for Rockstar, has his online resume on Art Station. Someone noticed that he had listed Rockstar India as an employer and that he was a Jr Vehicle Artist who would “Create concept vehicles matching with real world for Gta 5 dlc and upcoming Gta6”. 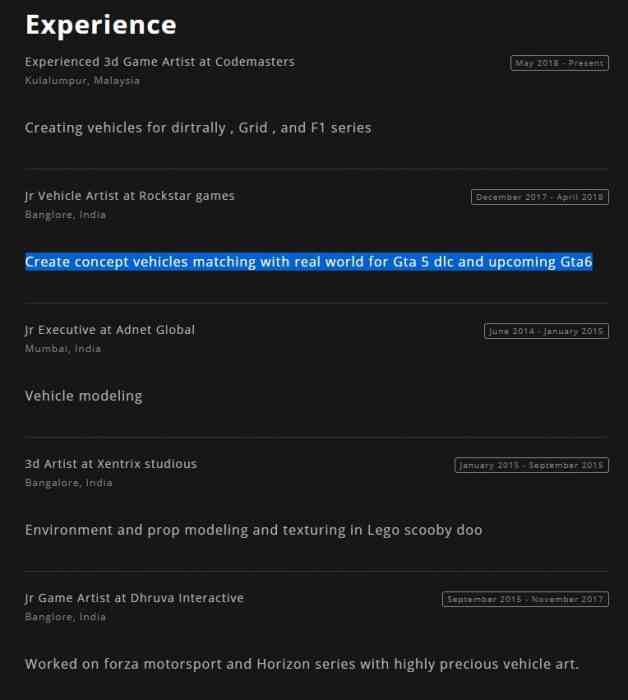 As interesting as this is, don’t jump up to pre-order GTA 6 just yet. There have been GTA 6 announcement hoaxes and pranks before, and this might just be another. Here is why it probably is. Michael’s resume says that he worked for Rockstar between December 2017 and April 2018. That would mean he was working on GTA 6 a year ago, before Red Dead Redemption 2 was done. While a developer can have multiple games in the pipeline, it is hard to believe that Rockstar would be that focused on GTA.

Bibin Michael’s resume has been updated since this news started circulating. The entire part of working for Rockstar was removed. 2017 to April 2018 is now blank. Non-Disclosure Agreements prevent this kind of thing from happening, so for a Rockstar employee to do that would be a pretty serious mistake. That is yet another reason some believe this to be a hoax. No word on GTA 6 from Rockstar yet.

What do you think about this? Let us know in the comments below.