With Six Arms, This Is Just Unfair

As an under-three-weeks-until-launch-day gift, NetherRealm has unveiled yet another character for us to anticipate. This is a brand six-hand-spanking new character making his debut in the series. Kollector can do exactly what he is named for, but we’ll get to that later. The most recent reveals of Mortal Kombat 11 characters includes Jacqui Briggs, Kotal Khan, Noob Saibot, and Cetrion who is also making her debut. Kollector is a six-armed creep with blue skin. I guess that makes him an arachnid? Except he doesn’t shoot any web from his butt. Not that we’ve seen at least. 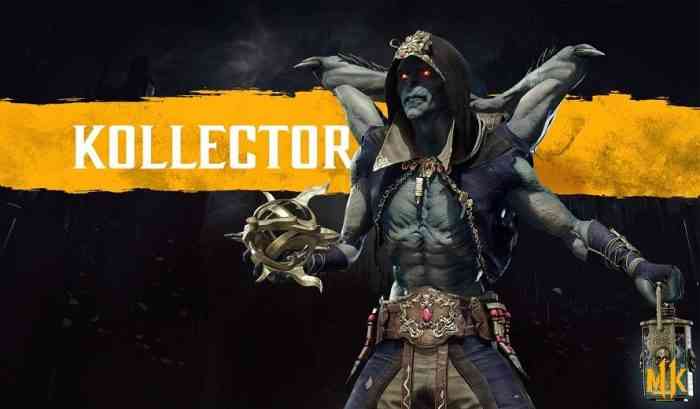 The trailer opens with the Kollector picking a ring off of his own hand? Uh, nope. Nope, that’s someone else’s severed hand. Baraka approaches him and Kollector says that the Tarkata (which is the species Baraka belongs to) “must pay tribute”. I guess Kollector is kind of like a assassin/repoman. Baraka answers saying “We pay with blood, not gold,” which I thought would be the coolest thing to be said in this trailer. Kollector hits him back with “Shao Khan demands both,” and that was even cooler.

For the rest of the trailer, Kollector shows off his various moves involving a bunch of blades he pulls out from his backpack of mystery. He also has the power to teleport behind his enemies, which makes great use of. He also throws bolas to trap his enemies for a while. Kollector faces off against Baraka, Kotal Khan, and Raiden during this trailer, ending on a high note by *ahem* “kollecting” from Baraka. Mortal Kombat 11 comes out April 23rd for PC, PS4, Xbox One, and Nintendo Switch.

What’s your impression of Kollector? Let us know in the comments below.