The excitement over the release of Borderlands 3 has been met with some major dismay over the announcement that Borderlands 3’s PC release will be exclusive to Epic Games until 2020. This has caused some backlash from the fan community who are now taking to Steam to tank reviews on Borderlands, Borderlands 2, and Borderlands: The Pre-Sequel. It seems that Tales from the Borderlands is untouched due to its development by Telltale. 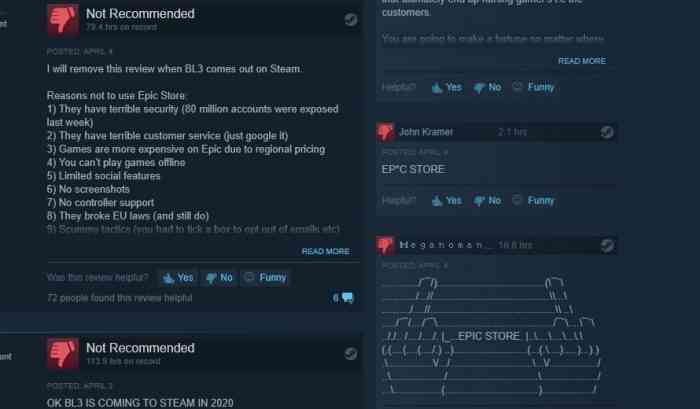 It’s unknown at this time whether the review-tanking will have any real effect on the long-lauded franchise, the act of protest seems to be getting the attention of the media, at the very least. At this time, Borderlands 3 is available for pre-purchase. The release date is also shrouded in controversy due to a tweet misstep by the Borderlands 3 Twitter page.

As of right now, the act of cyber-activism seems to be backed up with some serious critique of Epic games and their store, citing specifics that imply the company is not fan-friendly when it comes to game and privacy support. They also directly attack Epic’s business model of exclusivity. Numbers aren’t out on how many people have preordered, but Tencent, a Chinese holdings company that is 40% shareholder for Epic Games has had a 2 point increase in stock value in the past 4 days.

Sound off on the Borderlands 3 controversy below! Let us know in the comments what you think about Epic, Steam, and the slew of announcements over the past week.