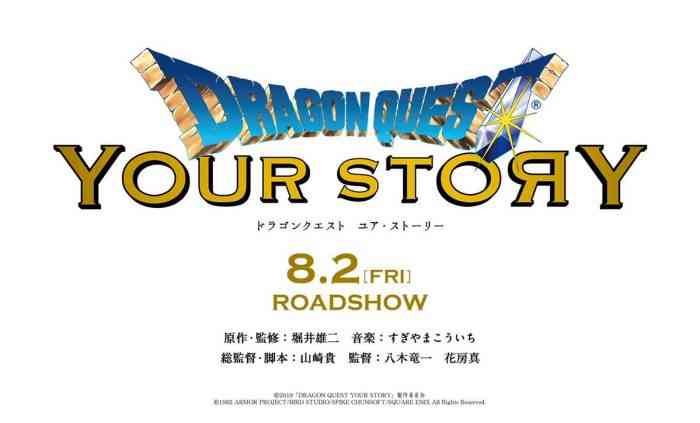 Announced by series creator Yuji Horii on Nippon TV’s News Zero, he introduced the 3DCG film as “Dragon Quest Your Story” and will release in Japan on August 2nd of this year. Based on the story of Dragon Quest V, the film will follow the story of three generations of hero, including the father and son featured in game. Dragon Quest fans will also be pleased to know that Slimes, the series mascots, will be featured as well.

Takashi Yamazaki will be directing the film – his recent works include Stand by Me Doraemon and Parasyte Parts 1 and 2.  Not much else is known at this time – but we’ll keep our eye out for more information.

Now – video game movies don’t have a great track record of being great (Rotten Tomatoes has a list here, but honestly I don’t agree with some of their placements…) but they also almost always end up being live-action, for whatever reason. Hopefully the Dragon Quest team have their hands in the pot for this one, so that it doesn’t end up a bad video game movie. Of course, Tetsuya Nomura himself did direct Final Fantasy 7: Advent Children and well…I like it and thats what matters the most here.

What’s your dream video game to be adapted to film? It’s a tough call for me, I’d love to see an adaptation of Archie Comic’s Mega Man run (okay, I know I’m stretching a little here) – but of course, it’d have to be treated right!!


Five Nights at Freddy’s Creator Breaks Down Screenplays for Film