The American Revolution Comes to 4K Next Month

The trailer shows off the then-and-now of a handful of different in-game scenarios, as well as a taste of how the DLC and Assassin’s Creed: Liberation look in their new 4K, HDR coats. The end of the trailer also confirms a physical edition for the standalone version of the remaster – the Ubisoft store has a Signature Edition that comes with an exclusive steelbook and 2 16cm x 12cm lithographs of Connor brooding in the American wilderness. 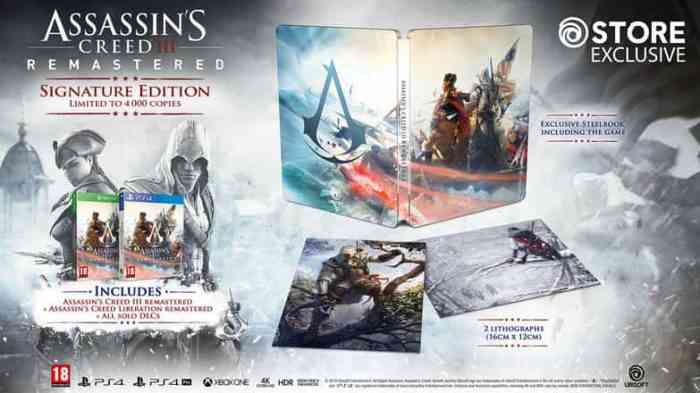 The game looks great, though there’s definitely some moments where the limitations of the time it was originally made shine through, particularly in facial animations and textures. There were some moments where I couldn’t tell which version the footage I was seeing was coming from – the original or the remaster (probably because all of it looks right to my eyes) – but for the most part, it’s an interesting example of how far visual fidelity has come in the past 7 years. Let’s hope the remaster plays like an example of how much Ubisoft has learned about controls in the same amount of time.

Assassin’s Creed III Remastered comes to PC, PS4 and Xbox One on March 29th, and there’s been rumblings of a potential Switch release in the future as well.