In case anyone forgot, No Man’s Sky is still around and better than it ever was. As a stark example of its beauty, one user just happened to voyage across interstellar space and find the perfect Halloween planet. He decided to share his discovery with the world, but not before making it properly festive. 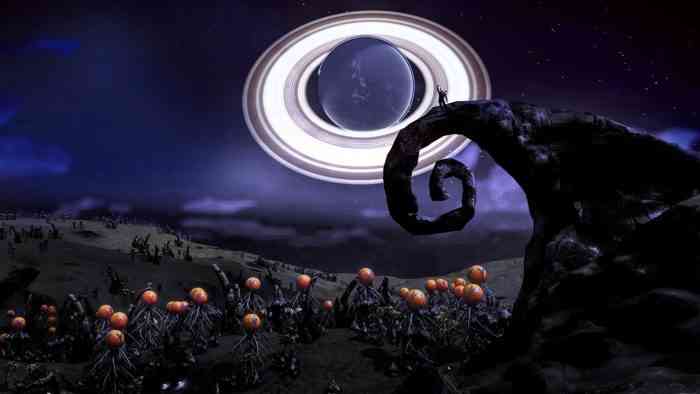 The planet was discovered by Reddit user reefguy007, who immediately recognized it’s potential. In the spirit of not putting up Christmas decorations early, he decided to recreate the movie poster for The Nightmare Before Christmas. Much of the world had already been procedurally generated for him, so he and his friend decided on a little terraforming with extraterrestrial pumpkin patches. Add some hyper-advanced mining equipment into the mix, and, voila, you have yourself a reimagining of Tim Burton’s classic.

No Man’s Sky is a space exploration game with random encounters on procedurally-generated planets. You can say reefguy007’s chances of discovering the Halloween planet were one in a billion, and you’d be correct. How about that luck? Nothing, however, says there aren’t more planets like it. Like many things in life and the universe, it’s likely they just haven’t been discovered yet. That may be where you come in.

No Man’s Sky is available now for PS4, PC via Steam, and it recently hit Xbox One after witnessing a myriad of gigantic updates. What are your thoughts on this Nightmare Before Christmas recreation? Let us know in the comments below.

Bad Video Games: To Fix or Not to Fix, That is the Question
Next
CD Projekt RED Shoots down the Idea of a Nintendo Switch Release of Thronebreaker
Previous
Fallout 76 Comes With 150+ Hours of Side Quests