It looks like Epic is about to introduce Fortnite’s most ridiculous and interesting limited-time game mode yet with Disco Domination coming to the Battle Royale phenomenon later this week. 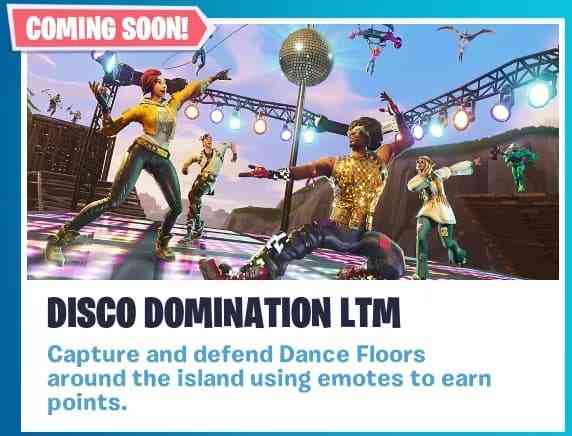 Revealed via Fortnite’s in-game news feed, the new mode is set to play like any other shooter’s Domination gametype (capturing and controlling small zones) but the catch is that players need to bust a move on the dance floor to actually earn points. No word yet on team player counts, but the mode should drop with Season 6’s first update tomorrow (Oct. 2nd) or sometime later in the week.

Fortnite’s had a busy week with the launch of Season 6 this past Thursday, hot on the heels of Sony finally being the last console manufacturer to open up to crossplay. Over the weekend, Kylo Ren starred in an SNL skit where he played the game, and “””””””health experts””””””” (mass use of quotation marks due to lack of credibility) claimed that Fortnite is “as addictive as heroin,” a statement clearly made by people who have not tried either of those things.

Fortnite is available for free on PC, PS4, Xbox One, Nintendo Switch, and mobile devices. Let us know what you think of the upcoming mode in the comments, and keep it locked to COGconnected for all the latest gaming news!