The yearly event for Summer Games Done Quick (SGDQ) has raised over $2m for Doctors Without Borders in one week through their speedrunning events of all kinds of video games. 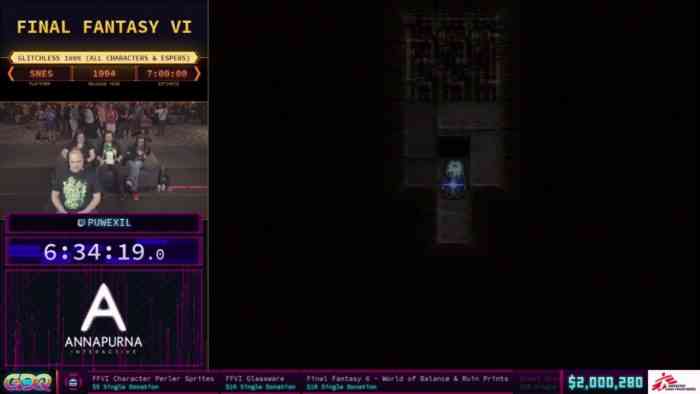 As SGDQ 2018 comes to an end, they do so on a record breaking note. Following the final night’s Final Fantasy VI run, the donation counter rolled over the two million mark, causing the entire venue, and stream, to go wild.

The two million dollars has been raised through a fantastic community of speedrunners, those who complete video games as quickly as possible, who have all come together for a week of video games in order to raise money for charity.

The charity in question is Doctors Without Borders, or Médecins Sans Frontières (MSF). MSF is an international medical humanitarian organisation who provide aid in nearly 70 countries to people whose survival is threatened by violence, neglect, or catastrophe

These catastrophes are primarily due to armed conflicts, epidemics, exclusion from health care, natural diasters, or malnutrition. MSF provides independent, impartial assistance to those most in need, and also won the Nobel Peace Prize in 1999 for its work. To learn more about Doctors Without Borders, visit their website for more information.

The stream finished and the event was over as the donation counter rolled to a total of $2,122,529.20, which is a new SGDQ record, as stated by their official Twitter.

However, this total does not include the money raised from T-shirt sales, the proceedings from their many sponsors, or the Humble Bundle, or even the proceedings gathered from Twitch Prime subscriptions and Twitch Bits donations.

SGDQ is an awesome event which is held every year to raise money for different charities, and has donated millions of dollars over the years. Their next venue will be for AGDQ 2019 (Awesome Games Done Quick), which will be take placed in Rockville, Maryland, on January 6th-13th.

Did you watch any of the events? Let us know what you thought!

Previous Fundraising Record for SGDQ Was Beaten by SGDQ 2019

SGDQ 2019 Games List Announced – We like the Runs
Next
Blizzard Reveal Exciting PvP Changes For World of Warcraft in Battle for Azeroth
Previous
Deadly Standing, New Game from Hodeo Kojumbo