The Flash – “Escape From Earth-2” Review

I really feel like an old-timey radio announcer should be saying this as the title of a radio play during the ’40s, but the team’s adventure on the alternate Earth comes to its exciting conclusion this week on The Flash! Sorry, Grant. No more costume changes.

After Flash got grabbed by Zoom last week, we open up to find Zoom running amok in Central City. A few bombs and a lot of messages has the city on notice that Zoom is looking for Harrison Wells. Cisco comes back to STAR Labs and fills in Wells on every, single, detail, of what happened when Barry got grabbed. They remember to grab other Barry as they try to lock Zoom out of STAR Labs, but to no avail. They hide from him in the time vault and now they’re officially on the run. In Zoom’s lair, Barry can’t seem to get out of his prison cell but he manages to connect with Jessie by telling her about her father but Zoom tries to break his prisoners, promising to steal Barry’s speed and then kill Jessie in front of Wells.

Back on Earth-1, Geomancer is still at large and Jay wants Caitlyn to hit him up with more Velocitor. But the last batch of Velcotior 8 made Jay’s condition worse so she is hesitant to give him the 9. Meanwhile, Iris’ new editor just happens to show up and is extra sassy about her piece about the Flash as he’s taking a whole J. Jonah Jameson approach to the hero. Iris wants to do a piece on Jay to give the people some hope, which her editor begrudgingly agrees to.

On Earth-2, our Earth-1 heroes explain what has happened to this worlds Iris as they need her help finding Zoom. While she can’t help them there, she and Barry have a way to track Killer Frost, who would know where Zoom’s lair is. The figure out where she is and Iris and Barry insist on tagging along. In Zoom’s lair, Barry has given Jessie hope for escape and their attention is turned to the third prisoner in the room, some guy in a cool MF Doom mask. They figure out that he’s trying to communicate with them using a code and they set about breaking it.

Earth-1 Iris gets a hold of Jay in an attempt to drum up a story about the other speedster but Jay is extremely hesitant. They’re interrupted by Geomancer making his presence felt as he tries to bring a building down, forcing Jay into action. He takes the Velocitor 9 and gets infused with the speed force once again. He takes off and manages to save everyone before the building collapses… but the building still collapses. But we don’t need to make an issue out of that. After, Jay feels good but Caitlyn still needs to run some tests. Jay has an immediate change of heart and offers to give Iris that interview, who seems to have all the information that she needs though. Now, I’m not a fortune teller, but for a character who, despite being a season regular, is also still listed as a ‘guest star’ on the billing, a dramatic role reversal like this isn’t usually a good sign. We’ll see though. 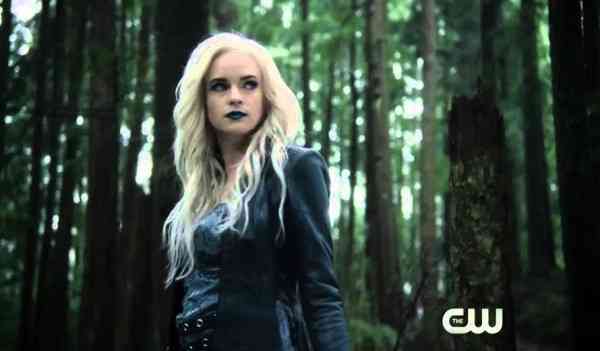 Which leads us back to the MF Doom masked man in Zoom’s lair. His code spells out ‘Jay’ which Barry deduces that he’s talking about this worlds Flash but the masked man seems more distraught by this than anything. Zoom shows up and stops the communication and phases into Barry’s cell to give him a beating but in doing so, shows Flash how to get out of his cell. The rest of the squad track down Frost who, of course, tries to kill them. Having her outnumbered, they manage to get the upper hand on her and convince her to show them where Zooms lair is. But Earth-1 isn’t out of danger yet as Geomancer shows up at STAR Labs to bring the place to the ground. While Jay is still recovering from the Velocitor, Caitlyn and Iris have to deal with the villain which results in Caitlyn hitting him in the neck with one of Cisco’s boots that incapacitates his powers. However, the speed cannon is out of phase again after Geomancers tremors. Jay is going to have to use the Velocitor to go fast enough to stabilize the breach while Joe locks the resonator in, keeping the breach open.

Barry tries to phase through his cell, but Earth-2 being on a different frequency is keeping him from getting through. Frost builds the squad an ice bridge which gets them to Zoom’s lair where some tearful reuniting happens. They free Jessie, but Barry still can’t phase through. He wants them to leave about Barry 2 gives him this speech about believing and Barry manages to phase out of the cell – just in time for Zoom to show up. Frost played them, but as Zoom promises to fulfill his promise of kill Jessie in front of her father, she changes her mind and attacks Zoom. As her ice powers slow the speedster down, Barry promises to come back for MF Doom and they make their escape. At STAR Labs, Wells and Jessie decide that they have to leave Earth-2 as Zoom will find them and will kill them. The whole group makes their way towards the breach.

Luckily, Jay and Joe’s team up managed to stabilize the Earth-1 end, but it has completely burnt out the Velocitor 9. Barry gets Cisco and Jessie through the breach but when he goes back for Wells, Zoom has him. Wells stabs him with the slowing serum from a few episodes ago and Barry grabs Wells and they go through. When they exit the breach, Jay throws the bomb to close it and as they all begin to celebrate sealing Zoom on the other side, he reaches through, phasing through Jay and pulling him back to Earth-2. They may have gotten rid of Zoom, but he managed to hurt them until the bitter end. 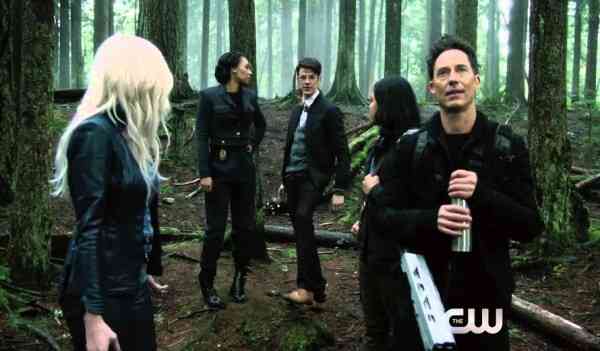 The exciting conclusion to the trip to Earth-2 certainly proved to be exciting. One of the stronger episodes of the season, The Flash has certainly stood out this season by being the strongest of the hero TV shows. Even their down episodes tend to still be on par with the good episodes that the other shows have put and when The Flash is strong, like the past two weeks, is it ever strong!

Let’s be serious, we all saw that coming with Jay, right? I even called it in the recap! You can’t let someone have dramatic role reversal who isn’t main cast without completely annihilating that character after. But, based on what we saw in Zoom’s lair, we haven’t seen the last of Teddy Sears. It’s pretty obvious that MF Doom was another Jay Garrick, which leads me to believe that Zoom is another universes Garrick, much like many people have theorized. It seems that Garrick is on a serious ‘The One’ kick, getting the speed from all the other versions of himself… which begs the question of ‘why Barry’?

This brings about the next question.  Next week, we’re back to a one off episode with the return of the hilarious and awesome King Shark. Cause why waste a good character on a throwaway joke? But,  what does that mean for Zoom in the future? He’ll obviously have to come back, but does he break through to Earth-1? Do they go back to Earth-2? How will Wells and Jessie play into the future of Earth-1? If Supergirl and thus, by extension, Superman and the Justice League, are also in this universe, where the hell are they while Zoom is running amok? Does Earth-2 not have a Justice League either? This is why you set up ground rules for your universes, people!!

Anyway, as I was saying, this episode of The Flash was not only a great episode on its own and a great conclusion to the two part Earth-2 arc, it was also a great lynchpin episode for the season as it opened up a plethora of new questions! It also set up a ‘new status quo’, but we all know that isn’t the case and that Zoom will make his return for an absolutely epic last few episodes of the season. Unlike with Arrow or Legends though, I’m very into seeing how the rest of Flash’s season is going to play out in the last couple of months!

Doug Mercer reviews The Flash each week – so stay tuned here for more! Also, check out our recent reviews of The X-Files, Arrow and Legends of Tomorrow!