Kelvin and the Infamous Machine Review – Kelvin Saves the World

Kelvin and the Infamous Machine Review

Kelvin and the Infamous Machine is an excellent point and click adventure that will bring many gamers back to a time when this genre was all the rage. Remember those fond memories you have of point and click classics like Full Throttle and Maniac Mansion? Get ready to add one more fond memory to the batch – Kelvin and the Infamous Machine is that good.

When his latest creation, a time machine, is ignored by the scientific community, mad scientist Professor Lupin vows revenge by traveling back in time to alter the past. As Kelvin, Lupin’s research assistant, you must travel through three different time periods to restore the timeline. Along the way, you’ll be aided by fellow assistant, Lise, and three of the greatest minds in history. You’ll encounter an eclectic cast of characters along your journey, such as a snooty theatre employee, an aspiring sculptor, to the most chill guy in the bar.

“Kelvin and the Infamous Machine is a hilarious point and click adventure with am excellent look and even better voice acting.”

Each of the first three chapters takes place in a different time period where you’re tasked with the goal of helping three of histories greatest minds. Each time period has a handful of sections that you can explore, each filled with various objects that you’ll use in various ways, eventually leading to the restoration of the time period. For example, you’ll need to steal a flute in order to charm a snake, the snake will be used to scare a person, which gives you access to a coat check ticket. Basically, anything that you can click (which is everything that is named when you hover over it with your cursor), will be used at some point during your journey. If you can remember everything that is “clickable”, you’ll be able to solve most puzzles pretty easily. Admittedly, there were a few moments where I just could not figure out what the developers wanted me to do – and it was a touch annoying traveling back and forth through a level clicking everything to figure it out, but this is only a minor gameplay complaint for an otherwise well-developed game.

The art style is colorful and all the characters are animated quite nicely. Each section had little visual jokes littered in the background – some a bit cliché, while others were quite clever. In terms of visuals, the only real knock against this game is the lip-syncing – which is to say, it is definitely not synced. It really is like watching a foreign film dubbed in English. The soundtrack is fun and quirky, with the occasional flourish of classical music (specifically Beethoven, which makes sense since he’s one of the three historical figures you must help). The absolute highlight, however, is the voice acting. Much thought was put into the voice of each character, creating a distinct and fun cast. Kelvin sounds a bit whiny (which is kind of the point) whereas Leonardo Di Vinci sounds like a caring father-figure, but my personal favourite was The Shuffler, who’s voice reminded me of Todd from the TV show “Code Monkey’s” (different voice actor though – I checked). 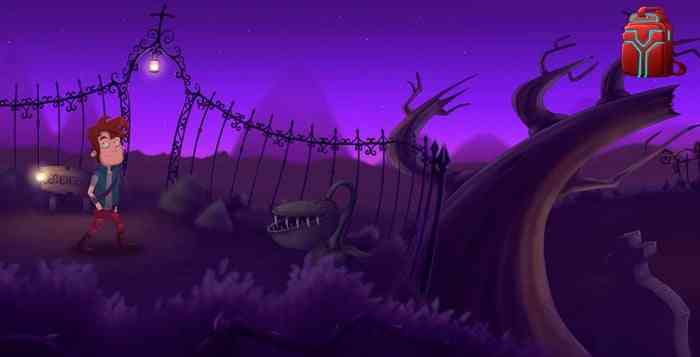 Kelvin and the Infamous Machine does not feature anything beyond the main story. There are no additional game modes or extra chapters when the game is completed. The game does have achievements, and during my first playthrough (which took four hours), I earned half of them – which is reason enough to eventually play through a second time. Each chapter also features a hidden picture to find, it’s not much, but they are definitely well hidden – I only found two of the four.

Kelvin and the Infamous Machine is a hilarious point and click adventure with am excellent look and even better voice acting. This game is the perfect way to spend an afternoon. While there were some frustrating puzzles, and the lack of lip-syncing was a bit annoying, everything else in the game was excellent. It is very rare that a game will force me to laugh as much as this game did. There were also a handful of fun pop culture references thrown in. The game sums up nicely with an excellent final chapter that wraps everything up in a familiar, but still unique way. Playing Kelvin and the Infamous Machine might not help you on any history exams, but it’s an absolute must for any gamers Steam library!