Lately, it seems like the entire world is obsessed with nostalgia and getting those warm, fuzzy feelings in our tummies from past experiences. Maybe it’s because issues in our current geopolitical climate are terrifying. Maybe it’s because things in our collective past were genuinely better. Maybe it’s just because we all refuse to grow up. I can’t tell you what it is, but I can say that some things are better left in the past. I’m talking to you Warner Brothers…leave The Matrix alone! It had its moment in the sun and it was a brilliant light on us all.

Enter Ghost Blade HD. Ghost Blade promises an experience of arcade shooters from a time when we pumped money into machines with no other purpose than to gain the top spot on that coveted high score list. It delivers on that promise and nothing else. Kudos to 2Dream for keeping their word. The problem with arcade games is that’s exactly where they belong: in an arcade. They’re a way to pass time while you wait for a movie or something a bro with money to burn buys for his man-cave.

Our current generation is filled with such sophisticated and complex games that I understand the urge to want to simplify everything back down. However, there is a limit to how simplified I want my games to be if I’m going to spend money on them. There is nothing in this game to gain besides the high score. I guess you could claim bragging rights with your friends. Assuming you have friends willing to demean themselves to this level.

“If you’re in that extremely small niche that enjoys this sort of game, you’ll love it. Anyone less than absolutely hard-core should steer clear.”

Ghost Blade HD is a hollow, unfulfilling, and somewhat tasteless attempt to elicit feelings of spending all your mom’s leftover quarters. You start with the option to choose from three inexplicably underdressed female pilots. I’m all down for half-naked ladies, but I’m truly lost at the need for the ones in this game. Each ship has a different firing pattern and movement speed. As you progress through a level you’ll gain power ups to fire a larger barrage from your cannons. It’s a legitimate arcade shooter without the joystick and button mashing, which was always the best part of the classic arcade machine. 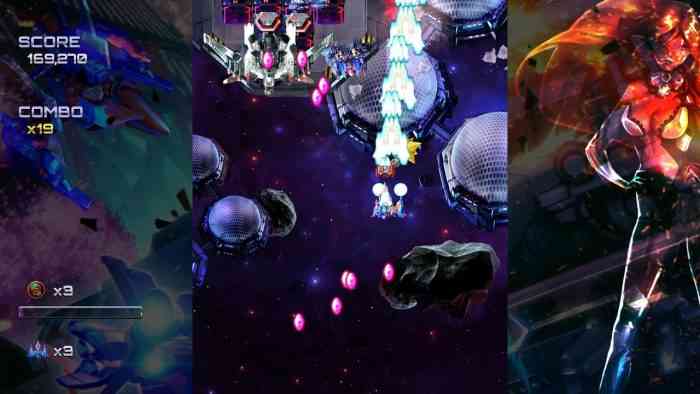 The first thing I noticed is the loose manner in which the game refers to itself as “HD”. It looks like someone blew up a phone screen and enhanced the definition just enough to fit on a 1080 setup without looking too pixelated. I mean, there are sidebars on the screen with static images to (poorly) give the illusion that the whole screen is being used. I happened to do the review for Sky Force Anniversary and that is a beautiful showing of an HD top-down shooter. This is like when someone says there is no difference between standard and high definition. I ask them politely, but firmly to leave.

Next up is the lack of any kind of direction for playing. The game is incredibly simple, but the “training mode” didn’t even give me a heads up for the bombs that grant temporary damage immunity and completely clear the screen. It was also deemed unnecessary to mention that you can hit a different button to focus fire straight ahead for more damage. Those are, literally, the only two other controls besides a basic fire command and they weren’t covered in training. I hate using the word “literally” if I don’t mean it but that one feels necessary.

“Ghost Blade HD is a hollow, unfulfilling, and somewhat tasteless attempt to elicit feelings of spending all your mom’s leftover quarters.”

The last thing I will lay on you is the harsh difficulty curve. I consider myself a “normal” level guy. I like challenges but I also prefer games with some depth to them. There are three difficulty levels in Ghostblade: easy, normal and hard. After about an hour of normal I turned it down to easy so I could finish a full campaign. The abrupt change from normal to easy is very apparent. Easy includes an auto bomb delivery when you get hit, along with a much less chaotic environment. I’m not proud of playing on easy but I did it to hold onto my sanity and my controller. 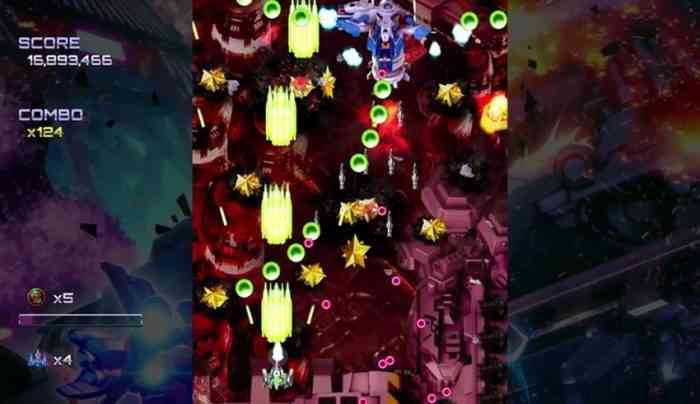 Fret not fellow gamers, it isn’t a total wash. You have the option to listen to an alternate soundtrack in the game. There’s a scoring mode that starts you in a fully powered up ship but is, essentially, the same as the regular “story” mode. Actually, let’s just go ahead and pretend I never played this game.

If Ghost Blade had a classic, well-established pedigree I could understand picking this one up. If you’re in that extremely small niche that enjoys this sort of game, you’ll love it. Anyone less than absolutely hard-core should steer clear.

*** Xbox One code provided by the publisher*** 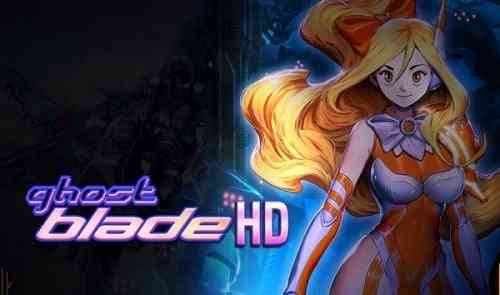 Rise of the Triad: Ludicrous Edition Announced For Multiple Platforms
Next Mass Effect Andromeda Review – Wake Up From Hypersleep and Join the Initiative
Previous Trove Review – Brightly-Coloured Banality That Keeps You Bobbing on the Surface