After developing several well-regarded PC RPGs, Bioware released its mainstream moonshot in the form of Knights of the Old Republic. Unlike anything they’d seen before – and way more polished – console fans gobbled that game up like last night’s pizza. After the brutally underappreciated Jade Empire, Bioware turned their eyes to the stars, dreaming of the most elaborate game world ever. That was Mass Effect – one of the deepest and most magical game worlds ever devised.

Ten years and one acquisition later, Mass Effect Andromeda is upon us.

Comparisons to the original Mass Effect trilogy and the epic journey of Commander Shepard are inevitable, and why not? Mass Effect was an undeniable milestone in the pantheon of role playing games and was one of the first to truly demonstrate the power of choice in video game narratives.

Personally, I turn into a squishy pile of love mush when I think back on Mass Effect – Mako and all – and thus my anticipation for Andromeda was nothing short of stratospheric. Despite that, I strove to avoid any information, gameplay, and details on the game pre-release – expectations tend to do more harm than good, so consider this a true face value analysis of Mass Effect Andromeda.

“Big choices have obvious pros and cons, but more importantly an uncertain outcome.”

The Andromeda Initiative, a project intended to settle the Andromeda Galaxy, was founded in 2186, just a year after humans first discovered the Prothean ruins on Mars. It was spearheaded by Jien Garson with the support of countless thousands including Alec Ryder – your father.

You play as Scott or Sara Ryder – twins with differing backgrounds, motivations, and interests. What they share is a disconnect from their father and an appetite for adventure.

When the human ark Hyperion arrives in the Heleus Cluster, it turns out things haven’t gone well. The Nexus (Andromeda’s Citadel) is in ruins, and the seven golden worlds that were expected are inhospitable wastelands. To make matters worse the mysterious Kett are running rampant around the sector, leaving a wake of chaos and there’s all sorts of political strife going on within the Nexus. 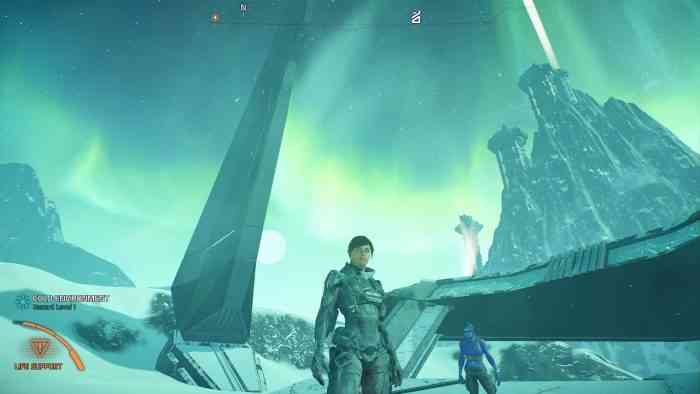 The Ryder family is equally enigmatic, with the twins struggling mightily to understand both their own history and their father’s motivations. The peripheral stories and B plots in Mass Effect Andromeda sometimes seem rote, but more often than not they are at least as intriguing as the main mission. A lot of that has to do with a strong cast of characters.

The Pathfinder team ticks almost all the boxes. Turian? Check. Krogan? Check. Asari? Check. Brooding humans looking to fight the power and take no shit from nobody? Double check. This was initially off-putting as memories of Garrus and Wrex and Liara lingered in my mind, but the squad defines itself quickly, leaving no doubt that this is a clean break from the original trilogy. Peebee, Drack, Cora, Jaal, and Liam are all extremely interesting to get to know, with hangups and personal problems that I genuinely wanted to help them solve, rather than just do to get to a forced and inevitable “meet me in my quarters” moment.

“Andromeda has 2 types of writing in it – that which is well done and connects me to the story, and that which feels like it was mailed in from dark space.”

Romances are somewhat more ambiguous than in the past, but such quest lines are still triggered by obvious dialogue options that are conveniently marked with a heart. Mass Effect has always been diverse, and you’ll be pleased to hear that there are options galore regardless of your romantic leanings.

The Ryders themselves are unpredictable and ever-changing – they come across as being absolutely human. I played as Sara (you can change her first name, though), and after finally settling on an appearance (more on that later) I was extremely happy to spend so many hours tackling Heleus with her.

As you may know, the paragon/renegade system is gone. While this has indeed removed some of the more puppies/butterflies and ‘complete-dick’ dialogue options, it’s an absolutely positive move. No longer are sentiments and options gated behind 50 hours of being an ass/angel, and it makes interactions infinitely more dynamic. 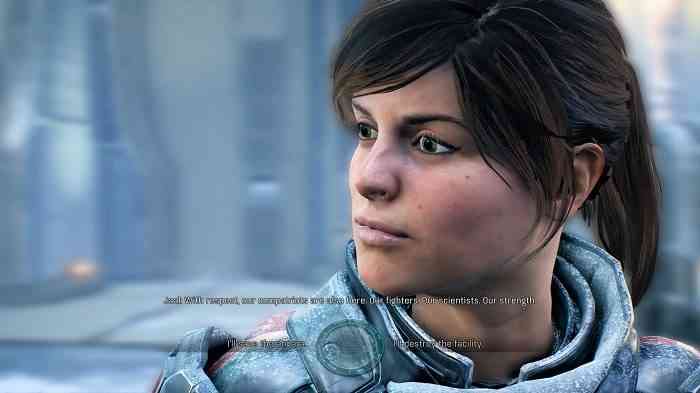 You’ll often be presented with 4 options featuring casual, professional, logical, and emotional responses. Thankfully this system avoids the Fallout 4 ‘all paths lead to yes’ problem, with much more delicate and gray area responses being the norm. Big decisions in Andromeda are often tough. REALLY tough. Big choices have obvious pros and cons, but more importantly an uncertain outcome. Rarely will you be seeing a clear ‘this is the paragon route’ option.

World building has always been Bioware’s bread and butter. Even when writing and technical aspects have been shoddy, they still manage to build a hell of an environment. This is absolutely true of Andromeda and the Heleus Cluster, which is chock full of intrigue and wonder.

One of the things I wondered is why Andromeda is so much like the Milky Way. Surely another Galaxy – zillions of miles away – should be completely alien. But no, the dominant life forms are bipedal organics with two eyes and a mouth. Sigh. There’s nothing even as interesting as the original trilogy’s Hanar and Elcor, and that’s a crying shame. 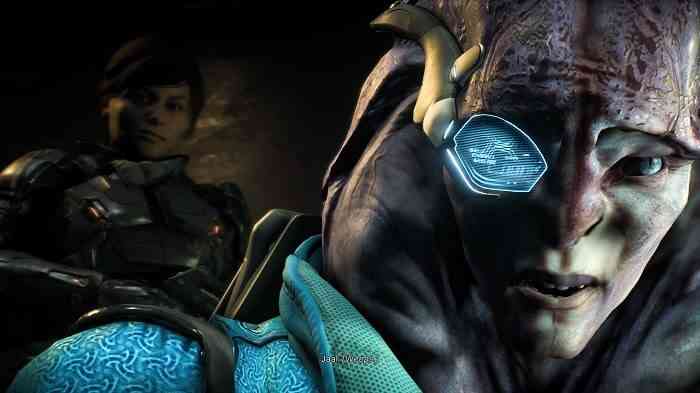 I quickly got over that, though. Concessions must be made to familiarity, lest the game get too abstract and weird for anyone to follow. In that context, it’s the kind of world that makes you want to leave no rock underturned, as you might find something fantastic under it. The trouble is, what you find under those rocks is far from consistent.

Bioware isn’t exactly known for their flawless and poetic writing, but more often than not their games have enough funny lines and heartfelt moments to carry the player along believably. Mass Effect Andromeda has 2 types of writing in it – that which is well done and connects me to the story, and that which feels like it was mailed in from dark space.

By and large, the main story and prominent side missions are well done, with solid acting to back up the writing. This is particularly true of the aforementioned Ryders and squadmates. Sure, there are some campy jokes and mildly forced/cringy lines, but recall this is an epic space opera/drama. Some of it ought to be that way.

“Most humans look like cardboard cutouts with dead eyes and robotic movements.”

Some of the periphery, though… yikes. Characters like Foster Addison and Director Tann sound like a broken version of Siri that’s had an accent randomizer applied. It’s some of the worst I’ve heard, and that’s saying something. Of course, this isn’t just an acting problem or a writing problem, it’s a full stack ‘why didn’t anyone fix this’ problem that goes far beyond in-game chit-chat.

Take visuals for instance. At times, Mass Effect Andromeda is undeniably drop dead gorgeous. The skyboxes, particle effects and level designs are rock solid, routinely dropping my jaw. Non-human characters are great too, expressing a great deal in their facial expression despite a lack of motion capture.

Humans, though… good grief. Most humans – Ryder mostly included – look like cardboard cutouts with dead eyes and robotic movements. It’s not that this isn’t an improvement from the original trilogy, it’s that it’s a substantial downgrade. I know that this is a new engine for Bioware (Frostbite), but the animation here is worse than any other Frostbite game I’ve seen. I also noticed a good deal of texture pop in and flickering on PS4 Pro – also something I’ve not seen in a Frostbite game. 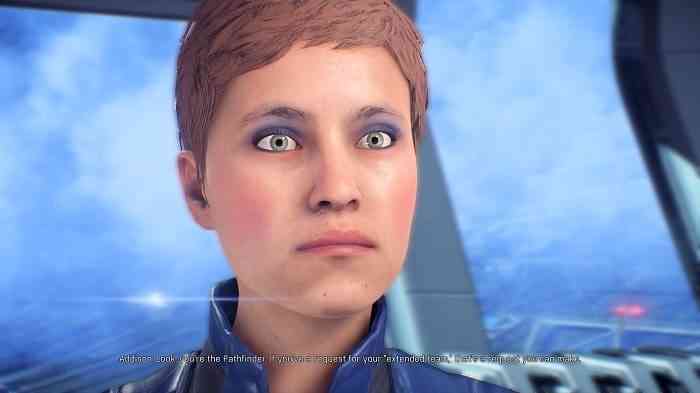 It seems that the engine change has had a negative effect on character creation too. Instead of offering a full range of customization, the CC has a bunch of preset heads that can be mildly altered for things like nose width and brow height. Making the Ryder of your dreams is still possible (mostly), but you won’t seeing any “Check it out! My Ryder looks like Ryan Reynolds!” posts unless things are dramatically changed. It’s a shame really, as BEING Shepard (and now Ryder) is and was a massive draw for the series.

Fortunately, the audio design is bloody incredible top to bottom. The music harnesses the history of the series while providing it’s own spin on things, while guns, powers, and especially the biotic jump are unqualified treats to listen to.  It’s the sharp and punchy kind of audio we’ve come to expect from Frostbite, and it makes each environment exciting to dig into.

A lot of that digging in will be done in the Nomad, which drives like a less shitty version of the Mako from Mass Effect 1. Along the way, you’ll build up the viability of colonies started on the planet, and drop off forward stations that can refill your supplies and protect you from the elements. The large, open environments of the habitats are enjoyable to cruise around, and there are lots of points of interest on each ranging from sidequests to combat encounters. That never gets boring, because the combat is a thing of beauty.

Combat in Andromeda is all about choices. You’re no longer limited to playing a single class of character, meaning all the biotic, tech, and combat powers are potentially on the table if you dedicate points to them. Spending skill points upgrades Ryder’s ‘profiles’ which add bonuses to various aspects of combat. Ryder’s AI buddy – SAM – allows you to switch profiles on the fly and adapt to any scenario that presents itself. In practice, it starts off a little uninteresting but eventually becomes unbelievably fun. Tossing an incinerate and charged overload at a shielded enemy (Fire Combo!) before tossing a singularity out feels great, as you can be jumping, dashing, and shooting all the while.

Combat can viably be completely different in every single encounter, if you’ve got the creativity bug like I do for this game. It’s smooth as a Salarian’s bottom too, with gunplay that holds up well to most shooters and solid cover mechanics. 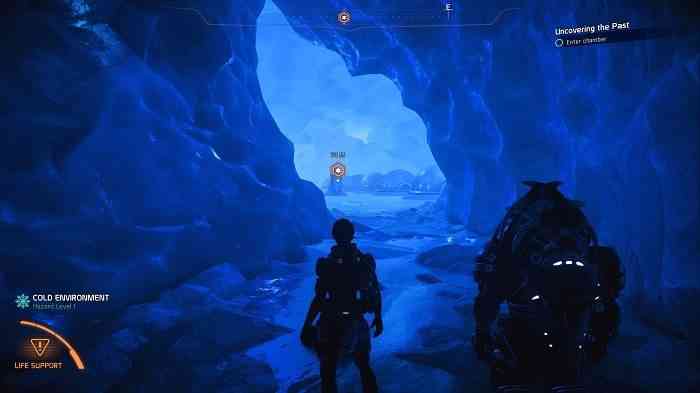 Control over your squad is diminished drastically though, and you’re now limited to simple ‘go there’ commands. This didn’t bother me at all though – you’ll be so busy with your own powers that any additional micromanaging would feel like too much. It all works out in the end, as the squad AI doesn’t try anything crazy positioning wise, and makes good use of their own powers. Drack also throws out a pithy ‘well that was fun’ after some battles, so I give bonus points for that.

Gathering new loot and equipment is done via traditional containers and chests, but also through a research and development system. You’ll spend a good deal of game time scanning objects in the environment for research points you can put towards crafted gear, and searching the planets for materials to make gear out of. There’s a hell of a lot of it too – choice is a strong component of advancement in Mass Effect Andromeda too.

I’ll leave it at that to avoid more spoilers, but rest assured that you’ll be making some tough choices about the fate of the Initiative as you go.

So is it fun? Heck yes it is. The fantastic combat and strong story points far outweigh the technical missteps and more cringeworthy moments. Bioware may have bitten off more than it could chew scope wise, and the fringe elements of the game clearly have suffered for it. However, they’ve nailed the key aspects of what made for a great Mass Effect game in the past. Fun exploration, compelling characters and stories (mostly), and some of the most interesting and fun 3rd person combat out there. If visuals are the main reason you play games, tread lightly. Otherwise, dive right in and join the Initiative. There’s a whole new galaxy out there for you to explore. 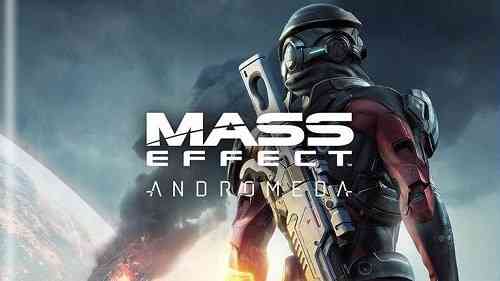