When you first hop into the world of Figment, you’re delving into someone’s mind. While this world space may be reminiscent of other modern isometrics like Bastion, it’s completely unique in its portrayal, and quite beautiful too. There’s something off about this place, but it’s still a place of pleasant dreams and nostalgic memories. Everywhere you travel, you’re surrounded by the life of another and the things they hold dear.

From an art style perspective, it’s gorgeous work made by very talented people. This hand-drawn world isn’t just a static background, but a collage of moving pieces that’ll cause you to sometimes stop, if just for a moment, to take it all in. As pretty as it is to explore, you’re not just walking around in awe of the environment–oh no.

The main form of gameplay is puzzle-solving, but there’s combat to boot. The puzzles are engaging and in-depth when they need to be, but the combat is more-or-less filler to break up a constant stream of puzzles. Dusty, your protagonist, he has a light attack, as well as a charged attack, but other than that, there’s nothing really to write home about. It’s clear that Figment wasn’t looking to break any boundaries in the realm of combat, so the puzzles had to bring their A-game. And most of the time, they do just that.

Puzzles aside, combat aside, it’s important to realize what Figment is looking to achieve through its writing. It’s fun to overcome obstacles with your mind and your brawn, but this game is a story through the mind of a trauma victim. The enemies you defeat are the embodiment of pain that’s looking to end a life. Though it’s a colorful, vibrant world, this world is wounded.

“From an art style perspective, it’s gorgeous work made by very talented people.”

That’s heavy, isn’t it? Sure, Figment isn’t the first game to get heavy, but I would make the argument that it’s the best at presenting it. Instead of using the seriousness of real life loss as a crutch for the storytelling, Figment uses it as an easel from which a more intimate story can be told. Pain and suffering suck — a big reason we play games is to escape those things. Figment isn’t here to beat pain and suffering over your head, but, like we must do in the real world, uses it to show us what comes next.

The story is great, but the real kicker for me was the audio. I’m talking everything from the voice acting to even the embering ambiance of the accident that happened in the real world — the one that kicked off Dusty’s adventure. It’s all presented in a way that’s fitting of the charming world that’s been created, while also staying true to the rather-serious undertone of the whole story. To give a direct example to this, as you explore this world, you’ll hear a harmony of horns playing in the background that, while very pleasant to listen to, sounds a little bit wounded. At first, you may not notice it, but once you do, it’s all you can hear. Because of what happened in the real world, even the otherwise-lovely background music is wounded. It’s incredible. 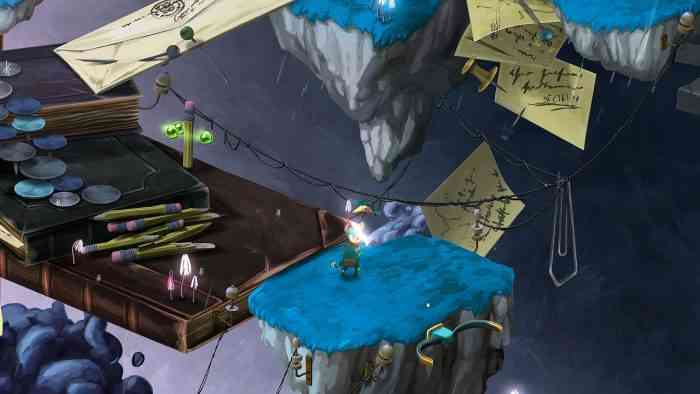 The voice acting of the main characters sometimes got on my nerves, especially that of Piper’s, the feathered sidekick, but that’s just my personal taste. Much like Fidget’s voice in Dust: An Elysian Tail, I just didn’t dig the presentation. This isn’t a knock on the production value, which was always high quality. Besides, it’s all made up for in the way the antagonists come to life through their voice.

These baddies, nightmares brought on by the accident, would be right at home in a Dr. Suess book that was co-written by the members of Slayer. Surprisingly, the voice acting manages to portray this in a way that’ll leave a smile on your face anytime they have center-stage. I truly enjoyed watching them cause chaos around the various levels of Figment. Check this video out if you’re as intrigued as you should be.

When it comes to levels, I was left wanting for more. Figment is a short game and once you’ve got the puzzles down, the levels really breeze by. I suppose, though, if there’s a complaint to have, it’s that I’m feigning for more of a game because I enjoyed it so much.

And that’s the truth: I enjoyed Figment very, very much. The combat is weak, but the puzzles, story, and atmosphere are not. Because of the way things left off and the surefire success this title is going to garner, I have no doubt that we’ll return to this world again. Until then, I’ll be replaying Figment until I know every note of this unbelievably good soundtrack. Give Figment a try–you’ll thank me later.