12 Is Better Than 6: The Apostles DLC Review – A Hilarious Trek Across The Border

12 Is Better Than 6: The Apostles DLC Review

I briefly played 12 Is Better Than 6 when it came out in late 2015 and, while I had a bit of fun, it was a passable adventure among other titles in the genre like the cult-hit Hotline Miami and its sequel. However, its new three-arc expansion is the kind of adventure that the main game should have always been – an even smaller game that focuses on its strengths. The Apostles has some suspect writing at times and the story makes some logical leaps where it feels like whole cut-scenes are missing, but we get the same great gameplay mechanics of the base game while throwing in a structured three-arc setup that introduces some interesting characters.

On the gameplay front, there isn’t much of a difference from the main campaign, but the DLC’s story structure gives the player the opportunity to use three different characters with their own unique combat builds. The grizzly cowboy that opens the story is your standard-fare, gun-toting maniac that shoots everything in sight alongside a character that focuses on traps and an aboriginal character that wields a bow and arrow. Alongside the game’s impeccable mission design, it goes a long way to never feeling like you’re stuck on one task for too long.

Speaking of said mission design, you’ll be boots on the ground at one point, planting traps and watching helpless bandits march to their deaths at another, and then jumping on trains to do battle thereafter. Coupled with the switch of characters, this short but sweet campaign smartly kept me interested throughout. However, getting through those bits might turn out to be a little more difficult than you think. Like Hotline Miami, 12 Is Better Than 6 is unforgiving when it comes to how much health it doles out to players. While enemies are downed just as quickly, you’ve got to make sure you set up a plan before running into a compound. I wouldn’t necessarily say the game has a strategic focus, but you’ll want to give yourself every advantage you can. In the case of 12 Is Better Than 6, that means playing with a mouse and keyboard if you’re on PC. While my Xbox One gamepad was fine for a while, there’s a level of precision you need when being flanked by six enemies in a matter of seconds that it just can’t provide.

“Technically, the superb hand-drawn art is alive and well in the DLC with satisfying blood splatter and the über-fluid animations of horses and other wild-life. “

One of the best things about The Apostles is the Fallout-esque way it sets up its story beats which are then paid off through gameplay scenarios. For example, you come across a damsel in distress that’s been caught by a group of foolish bandits who retreat back to their dwellings to discuss which one of them may have been cursed by the captured witch. Inevitably, the player then gets the chance to bust through the door with the ‘Indian Warrior’ character – yes, that is his name and he is a bad-ass – and slaughter the bandits one by one. It’s these types of situations that the top-down shooter genre was made for, and it is incredibly satisfying to see it all play out. Technically, the superb hand-drawn art is alive and well in the DLC with satisfying blood splatter and the über-fluid animations of horses and other wildlife. There isn’t much of any sound to immerse yourself in though, which is especially a shame for a title that should have had me craving to explore a fully realized Western world like in the upcoming Red Dead 2. This is especially surprising as the live action trailer made sure to focus on atmosphere, but it isn’t something that significantly harmed my overall experience. 12 Is Better Than 6’s The Apostles campaign is a ton of fun for those who want to jump back in or even for fans of games like Hotline Miami who are looking for a different kind of top-down shooter that has some whacky characters. 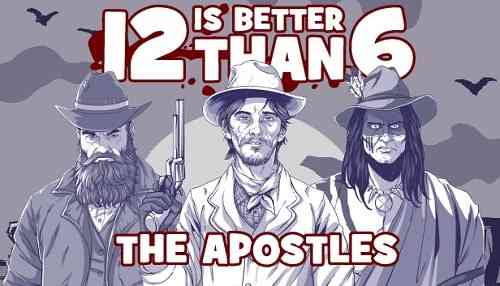